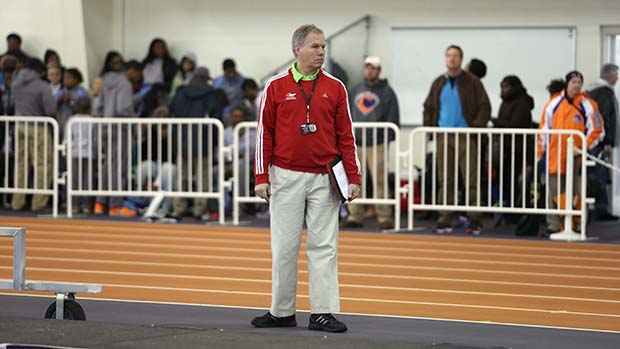 What is an International Technical Official (ITO)?
The ITO is a designation made by the IAAF for people to serve as oversight officials at their championships.

For major international championships the host country provides the majority of officials. At these meets, the IAAF appoints 6-10 ITOs to serve as oversight officials, mainly to work with the local officials to provide consistency between international meets. They also provide another link between the competition and the international meet management.

What does it mean to be named an International Technical Official for the fourth time since 2002?
Being an ITO is a remarkable opportunity to be involved in track and field at the very highest levels. I have been to the Olympic Games, and several World Championships. The level of competition and the performance of the athletes is astonishing.  Also, the opportunity to travel to these meets is usually lots of fun.

What is the process on your being chosen?
In October I went to London with about 70 candidates from around the world.  We were there for a half-day seminar about updates to the competition rules, a 3-hour written exam, and a 3-question oral exam. From the candidates about 45 people were named to the ITO panel for 2014-2017. This is the same procedure for each 4-year period.

How did you find out about being named this year?
About two weeks after the exam they sent out an email to all of the candidates with the list of the new ITO panel. They later posted the list on the IAAF web site.

So tell me a little about the exam.
Both the written and oral exams are closed book.  Some types of questions are:

- what is the weight of the women's shot put?

- based on these two qualifying sessions of the triple jump, who advances to the final?

- You arrive at the track and lane 3 is not usable, what solutions do you suggest to the meet director?

- There was a significant number of questions about athletes behaving badly and who had authority at which point in the competition sequence to issue a warning or DQ.

There was one oral question common for all of the candidates

- You are the ITO for the hammer throw, what do you do before, during, and after the competition.

What do you experience as an ITO?
It is a chance to work with officials and athletes from around the world. It has enabled me to see several countries.

Has anything changed for you in the position since your first time on the panel?
Being an ITO at a meet really has not changed.  Two big changes have been the transition from the exam being offered in English, French, and Spanish, to now only English.  This has eliminated some very good ITOs who were not fluent enough in English.  The other change is the location of the exam.  The first time I took the test they had several locations around the world. The last two times they have brought all the candidates to a single location in Europe, this time London.

What travel and meets will you attend with this position?
I have several meets scheduled this year, the North American Trials for the Youth Olympic Games team in Miramar, Fla. in April, the Continental Cup in Morocco, and the Central American and Caribbean Games in Mexico. In addition, I will be one of the referees at the World Junior Championships in Oregon.

What challenges have you encountered?
Probably the biggest challenge is language.  I only speak English and several times the senior officials at an event do not speak English.  So I often have worked through a younger official who can help as an interpreter.

What involvement do you hope to have this outdoor season in South Carolina?
I will be at several meets, including the Taco Bell Classic.