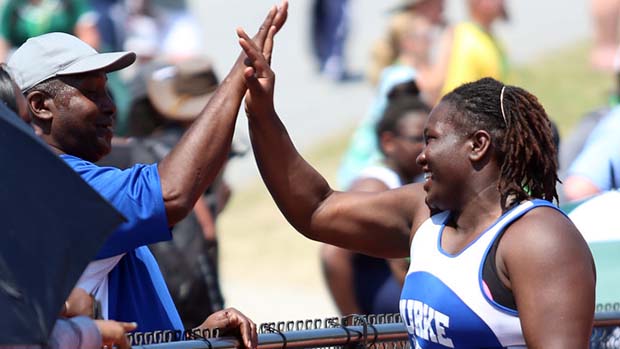 CHARLESTON – The best thrower in South Carolina – and one of the best at her sport in the country – has hopes of performing this summer on a much bigger stage, but she needs your help.

Burke High’s Raven Saunders, who in March set a U.S. high school record in the shot put with a throw of 56 feet, 7½ inches at the New Balance Indoor Nationals, is trying to raise $5,000 so she can compete in the USA Junior Track and Field Championships to be held July 5-6 at the University of Oregon’s Hayward Field.

“My fund-raising isn’t going as planned,” the high school senior recently told scrunners.com as she and the Bulldogs prepared for the state meet to be held later this month in Columbia.

The event in Eugene serves as a qualifier for Team U.S.A. in the World Junior Championships to be held later in July also at Hayward Field.  Those who know her, and the hurdles she has had to clear to get to this point in her track and field career, would tell you that Raven certainly deserves the opportunity to compete for a spot on that team.

“I actually came to the meet to see a young man who I had coached in the past and he invited me to see him throw,” Johnson said. “While I was waiting for the boys competition to begin I went over and watched the girls, and after a few minutes Raven came up. She was just standing there at the front of the circle and she let one fly 32 feet.”

Johnson said he walked over to Raven after the meet and encouraged her to continue throwing.

“Burke was in 1-A at that time, and I knew that a 38- to 40-foot throw in the shot put could win state in that classification,” he said. “I expected from what I saw that day that she was very capable of accomplishing that by her senior year.”

Two weeks after that meet on James Island, Johnson was asked to come to Burke to watch the team’s throwers.  Carlton Rice, who was the school’s athletic director at the time, asked Johnson if he would consider helping coach the girls’ team.

“That is how Raven and I started working together,” Johnson said, a relationship that has grown very close over the past three years.

“I have seven children and I can say, without hesitation, that the relationship that Raven and I have is as close to father/daughter-coach/athlete relationship as is possible,” he said. It’s a coach/athlete dynamic that Johnson says is challenging at times, but not unique, especially in a program as small as Burke’s.

There are currently seven girls on the school’s track team – its largest group in four years.  Raven has been the only thrower, girl or boy, Johnson said.

“Ninety percent of the practices since her ninth-grade year have been between Raven and I,” he said, “two to three hours a day during school practice.”  On weekends, the pair spend three to five hours practicing across the street at The Citadel.

“We used to use Stoney Field, but that is only set up for soccer and football, and is presently not set up for track and field,” Johnson said. The pair also use Harmon Field across from Burke, practicing around youth soccer practices going on at the same time.  At times, Raven will throw from the street or sidewalk back towards the field, he said.

Johnson said using The Citadel’s facilities has been a “Godsend” for the Burke program.

“The Citadel has graciously allowed Burke to use their facilities when they are not using them,” he said. “Without Coach Huddleston, Coach Kurt, Coach Brown and Asst. Athletic Director Groshon's encouragement, we could not have gotten to this point so quickly.

It’s a “juggling act” for the entire team, Johnson said.  But, despite the training challenges, Raven is typically “the first one in and the last one out.”

On school days, she leaves the practices at night, with Johnson often dropping her off at her home when the day is done.

“It takes a very determined and committed person to put up with our grind of training,” he said.

Johnson said Burke will drop from 2-A to 1-A next year, a move that should help in building the track program, though it will be without Raven.  The senior recently announced she would attend Southern Illinois University this fall on a full track scholarship.

For her final state meet, Raven hopes to realize a dream she has held since her freshman year – break the state shot put mark of 44 feet, 8 inches.  Odds are, that record will fall. Three weeks ago, Raven set a national record in the shot put at the Taco Bell Classic with a toss of 56 feet, 8 1/4  inches. The previous mark was 54 feet, 10 3/4 inches established in 2003 by Michelle Carter of Red Oak (Texas), an Olympian and the current American record holder in the event. Taco Bell Classic roundup.

“It’s been going on two months (since the indoor nationals) and I feel like there is an even bigger and better throw in me,” Raven said.

She also expects to do well in the discus at State.  Raven took first in that event at Taco Bell, again setting a new meet record with a throw of 159 feet, 11 inches, more than two-and-a-half feet beyond the previous Taco Bell best.

Her success in shot put and the training she has put into that event has taken time from the discus, but Raven said that could change once she gets to Southern Illinois.

“I have always thrown the discus and I’m pretty sure I will throw (it) in college,” she said.

As for the July qualifier in Oregon, she said she expects to get there and do well, “but, I just look to have fun with it.”

Raven has set up an online site where people can show their support for her efforts to get to Eugene. The site is http://www.gofundme.com/8ef7uo.