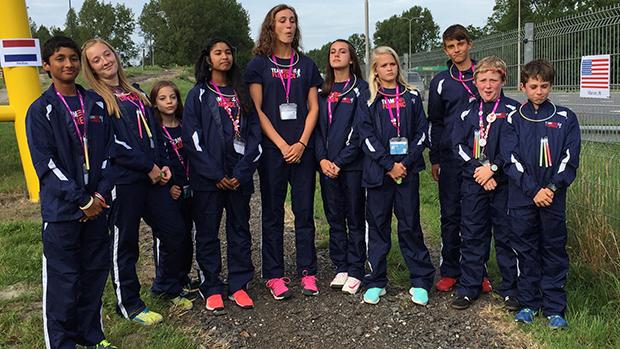 My name is Jack Banner and I just got back from participating in the International Children's Games in Alkmaar, Netherlands. Along with Jacie Gard, Walker Lilly, Sarah McCown and Janie Wagner, we had the opportunity to represent the City of Florence through the Florence Track Club. The ICG was created many years ago to promote peace and unity amongst various countries in the world through sports. It is just like the Olympic Games. This year, there were 88 cities, 35 countries, 5 continents and over 1,200 athletes who participated in nine different sports.We are all members of the Florence Track Club, under the leadership of Bill Truman, Alicia Truman and Julie Allen. We also have a number of volunteer coaches who assist with the Florence Track Club, which had over 200 members this year. Along with our many sponsors, we cannot thank them enough for allowing us the opportunity to experience the ICG.We loaded the City of Florence bus and drive to Charleston where we flew out to Newark and then on to Amsterdam. Although we had an unexpected weather delay, we ultimately got to Amsterdam and then boarded another bus for the 40-minute ride to Alkmaar. We settled into the "Olympic Village" and then immediately went to the track for our practice session. While there, we began to interact with athletes from many other countries such as Germany, Ireland, Israel, Great Britain, Taiwan, and many others. After practice, we got to take the shuttle over to the tennis courts to see some of the tennis players compete that came from Florence. They were Zoe Cauthen, Regan Dunnam and my roommates Joseph Desser and Anish Jonah. Florence sent a total of nine athletes to the ICG.That night, we went to the opening ceremonies where all of the cities got to march into the auditorium. This was a really neat experience to know that we were only one of five U.S. cities being represented at the ICG. We were proud to be from Florence and the United States! While waiting to process in, we got to know the athletes from several of the other U.S. cities, Marion, Ind. and Oakland, Calif. in particular.Everything was moving fast but the next morning we got up and were ready to go to the track to compete. Jacie and Sarah ran the 800, Janie participated in the sho tput and Walker and I were entered in the 1500 run. There were 29 participants in the 1500 run and only three were from the U.S.

The competition was really tough but it was fun to compete. The weather was perfect for the run as it was a bit overcast and in the low 70s, a lot better than the 100 degree heat that we left back home!

We all gave it our best, even though we were a bit deprived of sleep and six hours ahead of our normal time. Although we did not earn any medals, we learned what it will take to compete on an International level to be successful.Since the track competition was early in the Games, we had time to tour the City of Alkmaar and learn a lot about the culture of The Netherlands. The country is beautiful and all of the people were very nice. A few of us also got the opportunity to go to Amsterdam on a train where we rented bikes and rode all through the city. I have never seen so many bikes in my life. Instead of parking decks for cars, they have parking decks for bikes. Some of the athletes' families went as well and they went to other places too like Belgium, England and Germany.The last night we had closing ceremonies, which was a lot of fun. The athletes take such things as pins and keychains to exchange with each other. We all got pins from many different countries. A few of us exchanged our Team Florence warmup jacket with other countries. I got one from New Taipai City, which will be hosting the ICG next year.This was a wonderful experience for all of us and one that we will never forget. The chance to represent the City of Florence and the United States was a chance of a lifetime for me. Track and field and cross country have given me the chance to see a lot of places and I'm only 12 years old. These sports have given me the opportunity to compete all over the state of South Carolina, parts of the southeast and in national competitions in Albequerque, N.M. and San Antonio, Texas. However, I never dreamed I'd be able to go to another country to run. The sport of running is great!!