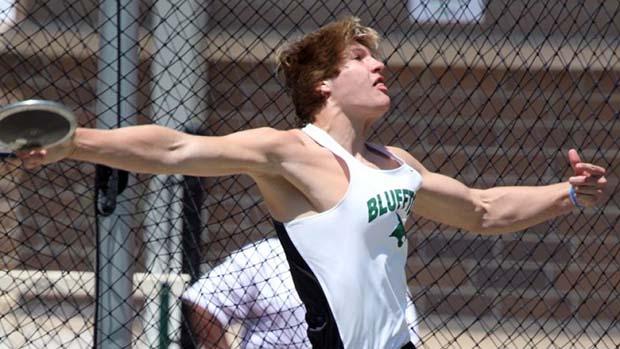 How do you look at your number one state discus ranking and number three shot put ranking?
I take the ranking with a grain of salt. I'm taking things one step at a time. You'll never know who could come up and get past you. Of course I'm happy with the fact that i'm ranked number one in discus and number one in shot in the state, but I'm not going to get too comfortable with where i'm at currently. The season is still young.

Training, how do you prepare for multiple events?
Being a rotational thrower in the shot put and the discus, the technique in both of the events are similar, so I practice both events about the same amount each week when preparing for a meet. I do a lot of throwing and a good bit of lifting to make sure that I'm feeling explosive for a meet.

Do you have a favorite event, and why?
My favorite event has always been the discus. It's my best event and I love the fact that brute strength and size isn't necessary to get it to go far. its all technique and finesse.

Where do you see yourself going the rest of the season after this past weekend?
I see myself finishing the season really strong. I know how to train smarter and I know what I need to do with my training so that I make sure that I peak properly. When I reach my peak phase I'm expecting my marks to go up a good bit.

What are your post high school plans?
After high school I'll be headed to East Carolina University to throw for their track team. I'm not sure on what ill be majoring in or what kind of career field I'd go into. But it'll be a good experience during these next four years.

How did winter training go?
Winter training went really well. I was throwing and lifting a lot so I can get my athleticism up. I tried my best to break down my technique to make it as smooth as possible, even though I still have a lot of things to work on technically.

How long have you been competing in track and field and how did you get started?
I started to compete in track and field in seventh grade, and I had initially wanted to be a runner. But after the first couple of practices I found out that running might not be the best option for me. So after my running career had been cut short I picked up the discus and the shot put and I wasn't half bad at it, so I started practicing and I started liking throwing a lot.

Do you have a specific motivation?
My motivation is knowing that I have to prove people wrong when I throw. I don't have the typical thrower body type, I'm on the smaller side, so most throwers and coaches who have never heard of me or seen me compete wont expect anything more than 40 feet in the shot put or 120 feet in the discus.

What do you enjoy about the Bluffton team?
I really enjoy the fact that our team is so energetic at practice and at meets. We have so many underclassmen on our team that have a lot of potential. They do track because they simply enjoy the sport. They don't view practice as a chore, they view it as something that they really like to do.

What event strategy works best for you?
My only event strategy is to relax when I get in the circle, clear my head, and just throw it. I try not to get too tense. The more tense I get, the more out of control my throws get.

Do you have a technique that you prefer or have been trained to use?
I use the spin technique in the discus and the shot put. Being a smaller thrower, I have to use as much speed 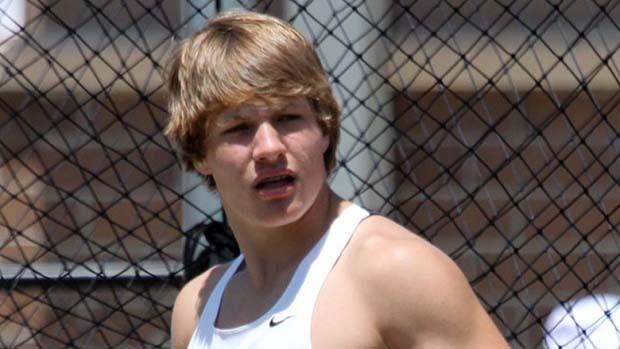 and power as possible, so I spin instead as just doing a basic standing throw at the front of the circle.

Favorite quote?
"If you cant throw with the best, go run with the rest."

Do you see yourself coaching in the future?
Maybe, it just depends on how things line up. I would definitely enjoy coaching but it's hard to say right now.

If there is one thing you could do in the world what would it be and why?
I would probably have to go to New Zealand, it's a beautiful place that I've always wanted to visit.