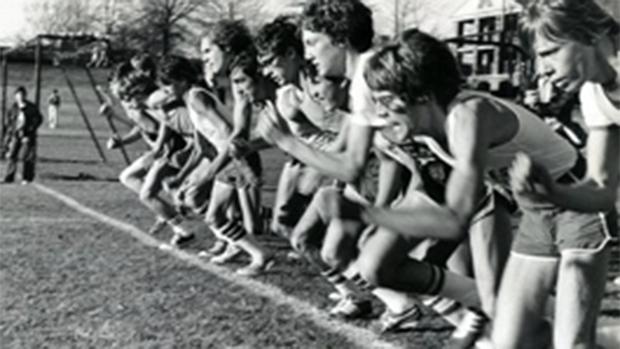 Photo above: The start of the 1973 Greenville County Championships the first of its kind.  The athletes lined up by alternating school - Berea's Wayne Coley is pictured on the far right.  He won the meet.  (Wayne was third overall at the State Meet. He then went on to Furman where he was a multiple All-American and named Furman's first Athlete of the Year. In 1982, he coached Hillcrest to their only State Championship).  A Hillcrest athlete is next followed by Marc Embler of Berea, another Hillcrest athlete and I am fifth on the line in the photo.  The race was around 2.25 miles and Hillcrest won the county meet, but placed behind Berea at the state championship - Berea was ninth and Hillcrest was 12th.  Much to my dismay now, Eastside had a team but chose not to attend. I have no record of my place or time at the Greenville County Championships.

Want to discuss this topic? Comment on the forum

Nostalgia! It can sure waste a lot of your time!  You get this idea in your head about how something relates to something in the past and sometimes it just won't let you go.

This happened to me a few weeks ago when I started planning for my part of the Greenville County XC Championships.  I have long been involved with this meet; actually, meet that has ever been (at least of the ones I can find).

It all started when I was thinking about the meet moving to Wednesday this year because of the crazy school district calendar.  I wondered if the meet had ever been held on a Wednesday before and if the 18th would be the earliest date of the meet.  Here goes the nostalgia!  Time to dig into my library (and some more recent results on SCRunners) of meet results from the past 44 years and see what I could find.  One thing always leads to another and then another; I spent days recording team and individual results from our Greenville County Championships and how they compare to the S.C. State Championships.  Some pretty interesting stuff!

Before I start intriguing you with the information that I found, remember a few things:

1. I am very partial to the Greenville County Championships because of my long involvement as either the sole Meet Director or sharing the duties with Greenville, Hillcrest, Riverside and now Woodmont.
2. That Greenville County has a lot of schools - now 14 public schools with a cross country program and at least six charter or private schools.  But, that is less than 10% of all of the schools in South Carolina.
3. There are a lot of chances to win a State Championship, now with five boys and four girls divisions but it wasn't always that way.
4. I am missing the results from the girls' county meet for 1980, 1982, 1984 and 1998.   The missing results will change the data percentages.
5. You can make anything you want out of statistics.

Back in the early 1980's an article appeared in The Greenville News praising the great running program at Spartanburg High.  A new coach from Illinois, Jim Kilbreth, was breathing new life into an already decent program and racing his team to the top.   A Greenville Track Club (GTC) friend of mine, whose son ran at Wade Hampton and knew I was the coach at Eastside printed The Greenville News article in the GTC newsletter and wrote on the bottom of it "Cross Country is where it ain't in Greenville."

This upset me because there had been some good teams in Greenville.  But it made me work harder and the passion began to spread other schools. I then met Delmer Howell in the summer of 1982.  As I was introduced, he said he was the new cross country coach at Mauldin and that he was going to win the State Championship that year (he did!).  And that arrogance really got me moving.  He went on to produce arguably the best team in the history of the state in 1985.  Hard work by other coaches forces others to either work hard or be complacent with a mediocre program.  Many of the schools in Greenville County had all of the ingredients to become special.  Along come more great coaches such as Willie Wooden (Riverside), Rick Zeller (Wade Hampton), Rodney Adamee (Christ Church), Eric Cummings (Riverside) and George Carr (St. Joseph's) and Marie Kernell (St. Joseph's).

Did you know? The Greenville County Championships first meet was held in November of 1973 (unofficial state meet was Dec. 13 and won by Edmunds High School (not a school today, there was also a junior varsity race).  I know. I ran in it.

There were only two teams that comprised of 11 runners combined (see picture) at the Greenville County Championship in 1973.  I know who was there (Hillcrest and Berea), and who won. Hillcrest won the team title and my teammate Wayne Coley of Berea won the individual title. The course was around 2.25 miles and was held at Furman beginning on what is now the Furman soccer field. I attended Furman the next four years and do not have the results from those meets.  I have searched old newspapers and have found no results so I don't know if there even were meets then.  We restarted the Greenville County Championships in 1978 and they have continued still today.  The meets started with just a handful of teams.  The first few girls' meets only had one scoring team.  The competition was decent but not quite on the state level for that time period.

A school from Greenville County has won a boys or girls state title every year since 1981 except 1999 and 2009. The meet has normally been two weeks before the State Championships.

Let's look at some more figures.  In the girls' state meet

Now for the boys

Are there other areas in our state that can lay claim to the same statistics?  I think not!  Spartanburg County may offer a similar scenario with all of the State Championships won by Spartanburg, Dorman, Broome, Byrnes, and Landrum. But, not close enough.  The counties that make up the Columbia area may combine to have a great multi-county meet with schools like Spring Valley, Richland Northeast, Lexington, Irmo, and Chapin just to name a few but again not close enough.  In the Lower State, anyone in the same county as Hilton Head would have their hands full!

So to my friend at the Greenville Track Club - Cross country is where it's at in Greenville.  To all of the rest of you not fortunate enough to call Greenville home - if you want to your win column, stay away from our schools!

To answer the questions I first sought - this is the only day the County has been on any day other than Saturday and the earliest date was October 16 in 1982.

I wonder what my next nostalgia binge will be.  Since I "retired," I've got too much time on my hands!