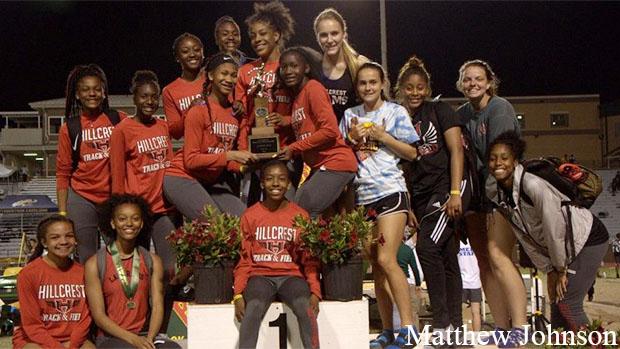 COLUMBIA - High school boys competing in the 26th Annual Bojangles' Track and Field Classic last weekend set a new high school U.S. number one, a U.S. number six, broke a pair of meet marks and came close to matching three other meet records, while on the girls' side, the meet standard held by a 2016 Olympian fell and another athlete came within a fraction of matching another Bojangles' record.

Liberty High's Keyshawn King was the headliner for the boys. The senior set a new U.S. number one in the triple jump, jumping 51 feet 4.25 inches. That jump also shattered the old meet record dating back to the 1997 Bojangles' of 50 feet, 10 inches.

Jake Toomey, who ran the second leg in the race, gave teammate Jackson O'Hara a lead the team would hold until the finish.

"I just wanted to give Jackson the biggest lead I could," Toomey said.

The Weddington quartet are all underclassmen, meaning they will likely be back next April to defend their Bojangles' record in the 4x800.

Meanwhile, Dreher High's Jacory Patterson took two events, the boys' 100 meter and 200 meter dashes. The senior was only eight one-hundreths of a second short of the meet record of 20.71 seconds. Patterson's 100-meter time Saturday was 10.4 seconds.

"We came into this meet ready to run," said Westwood senior Montre Miller who ran the first leg. "We've been talking about it for weeks. We wanted to give it 110 percent and get a win."

Another senior, Dermonti Romey, who ran the second leg, said his teammate gave him a "good lead."

Fayette County High in Fayetteville, Ga., placed a close behind Westwood, finishing the 4x100 in 41.68.

In other boys' results, Trey Johnson, another Fayette County High senior, took the 400-meter dash, posting a time of 47.26 seconds.

Greer High senior Quavian White posted at 10.4 in the 110-meter hurdles to win that event, while in the boys' varsity mile, senior Brent Bailey of Ocean Lakes High won with a time of 4:18.48, just ahead of junior Anton Idhammar of Cary (N.C.) High who crossed the finish line in 4:18.52. Junior George Wells of Spring Valley High took the JV mile, finishing with a time of 4:43.32.

In the discus, senior Joshua Sobota of Bearden High in Knoxville, Tenn., took the event with a throw of 181 feet.  Sobota narrowly missed a win in the shot put. His best of 67 feet, 3 ¼ inches was a quarter of an inch shorter than the winning toss of 67 feet, 3 ½ inches from LenNeth Whitehead, a sophomore from Athens Academy.

On the girls' side, Veronica Fraley, a senior at Wakefield High in Raleigh, smashed the meet record in the discus with a throw of 161 feet 10 inches, topping the previous mark set in 2014 by Raven Saunders by nearly two feet.  Saunders, a Burke High graduate, competed in the shot put at the 2006 Summer Olympics in Brazil.

Fraley also won the shot put at Bojangles' Saturday with a toss of 46 feet.

In the girls' high jump, Sophomore Morgan Smalls of Panther Creek High in Cary, N.C., won with a jump of 5 feet 10 ½ inches, a half-inch short of the meet record. Tia Lucas, an eighth-grader from James Island, placed second in that event with a best jump of 5 feet, 6 inches.

In one of the most competitive events of the weekend, Hillcrest High's Zariere Dumas won the girls' 200-meter dash with a time of 24.39 seconds. Just six-tenths of a second separated Dumas from the sixth-place finisher in that event.

The girls' mile went to Sarah LaTour, a senior from Cuthbertson High with a time of 5:07.12; sophomore Haley Bishop of Nation Ford won the 100 meter dash in 11.48 seconds; junior Sierra Fletcher of Southeast Raleigh High took the 100 meter hurdles in 13.91`seconds; and junior Ariana Rivera from Providence High in Charlotte, won the girls 400 hurdles in 1:02.10.