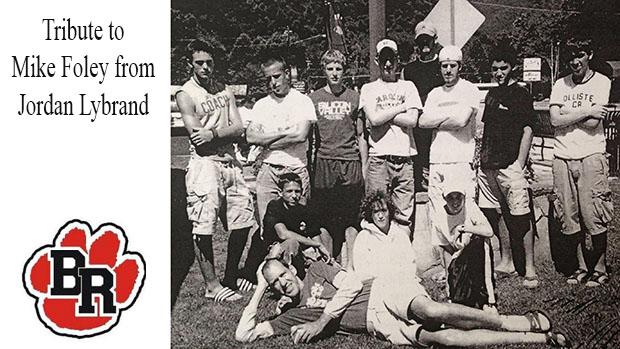 Mike Foley was a man that wanted the best out of me and wouldn't accept anything less. As a seventh grade kid that didn't know much more about running than thinking how awesome it was watching Michael Johnson run fast, it was hard to take such high expectations. This was something that I ended up thriving on and wanting more of by the time I graduated high school.

I learned that if you wanted to be good at anything in life you had to put in the work. You had to put your best out there. As one of Foley's favorite running books would say..."What was the secret, they wanted to know; in a thousand different ways they wanted to know The Secret. And not one of them was prepared, truly prepared to believe that it had not so much to do with chemicals and zippy mental tricks as with that most unprofound and sometimes heart-rending process of removing, molecule by molecule, the very tough rubber that comprised the bottoms of his training shoes. The Trial of Miles; Miles of Trials." - John L. Parker Jr., Once a Runner

I wish I had one more running season with you, coach. #cancersucks
https://t.co/Kr8687Tb1S

Foley would always tell us that when you were tired and broken down in a race that your form was all you had left. If you worked on good form it would carry you through. I have told numerous runners this tip over the years. Today on my afternoon run I thought about how all this time I applied this to running but I think it is just as much about life, and I think Foley displayed that to us. If you are broken and tired. Keep your true form, be you, keep grinding and it will carry you through.

If you have a coach that has impacted you or made an impression on your life please reach out and say thank you and let them know what they meant to you.

Foley was the coach that you might not like if he wasn't on your team, but if you were lucky enough to be on his he would fight like hell for you and support you until the end.

Thank you Foley for all you did and taught me over the years. I know you are out there somewhere miscounting 400s for someone (we did 20 not 16) or driving around giving splits out of your car as you tell them to speed up. I'll be dedicating many miles to you Coach! And I pray for peace and comfort for Robin Tarpinian.