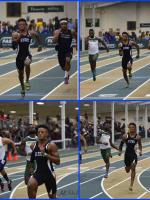 Monroe Area Alums Excelling Collegiately and on World S...
Monroe Area Alums Javianne Oliver and Demek Kemp doing very well on the next level...
4A Boys Georgia Olympics Meet Preview...
It could be a probability that Marist is once again going to defend and sweep the 4A team titles in Track and Field, much like the War Eagles accomplished in Cross Country this past Fall. 100 points m...
4A Sectionals ReCap...
Its quite evident after the completion of last Saturday&#39;s round of qualifiers that class AAAA is the 2nd strongest in the GHSA. 96 MileSplit National Elite standards were achieved.. If one isn&#39...
Demek Kemp Signs his NLI with South Carolina State...
Demek Kemp from Monroe Area High School signs his NLI to compete for South Carolina State ...