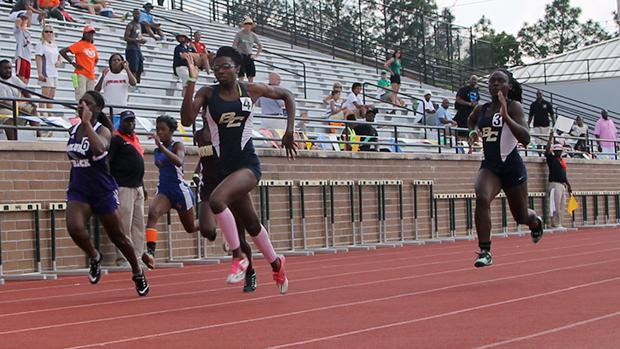 COLUMBIA -- It's like one of those brain teasers: Quamecha Morrison won the state championship in the high jump last year. She could have won a few more events, but she only entered one.

For starters, the good news is that on Saturday, Morrison, a senior at Battery Creek High School, made up for being shortchanged the previous year. By early evening, as she walked around the infield at Spring Valley High School, she was accompanied by the jingling of four gold medals.

"I was very excited," she said. "Since this is my last year, I had to go out with a bang."

Especially after last year closed, relatively speaking, with a whimper.

So back to the puzzle and, in fact, to her back, which is what Morrison injured in practice leading up to last year's Region 6 meet.

Morrison thought the injury had healed by the time the region meet commenced, but when she hit the first hurdle, the pain resurfaced and she had to stop.

She had won the state championship in the high jump as a sophomore, and she really wanted to compete at state again in that event.

"I just needed one jump to qualify," Morrison said. "I took that jump, and my coach actually had to help me get off the mat, because I couldn't get off myself. So I qualified.

"The next day, I went to a chiropractor, and he lined it up for me, and I was done. I came back and won. I was like, if I'd have gone the day before, I would have went for all my events. But it made this year a lot more special."

Making it even more noteworthy was the fact that her performance led Battery Creek to its first team championship in girls track.

"For our school, we have a female athlete of the year, and I didn't get it, and that really hit me hard," she said. " I was like, 'I've got to come back this year. I've got to work harder.' And this is what happened."

Morrison began running track her freshman year. She had planned to play volleyball, but a couple of the track coaches convinced her their sport might be a better idea.

After four seasons and six individual state championships (three straight in the high jump), Morrison said Saturday, "They were right."

Morrison maintains a 4.0 grade-point average and plans to become a physical therapist. She said she realizes her success casts a spotlight in her direction.

"I never got into trouble," Morrison said, "but the more people kept looking at me, I was like, 'Other people are looking at you. You can't just go out and act any kind of way. You have to set an example.'