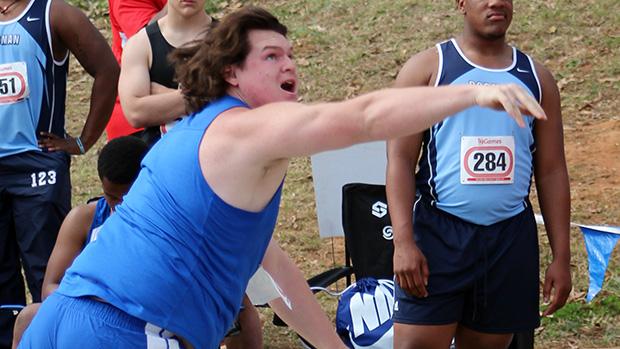 TRAVELERS REST -- Even though Travelers Rest High School senior Davis Reid may have the body of a shot put athlete, he has been clearing hurdles his entire life.

Davis, who will be competing at the Class AAA qualifier Saturday at Lower Richland High School, has overcome numerous obstacles in his life to reach the pinnacle of academic and athletic excellence.

The Devildog was born with a learning disability. He was stricken with dyslexia and a central auditory processing disorder. The two disorders affected Reid's ability to read and create words as child. Due to this academic setback, Reid was held back a grade in elementary school, and began receiving resource accommodations at school in the first grade.

This is when his mother became very impressed with her son. "Davis took advantage of the resources he had, and has used them to his benefit all the way up through the 12th grade," said Tina. "Davis never had a 'why me' attitude. He worked hard to overcome those issues."

"I can remember in first grade," Davis said. "The teacher would call on me to read, and while my friends were spitting off words, it was taking me two minutes to get out four words. I would go home crying that I couldn't read."

That was when he said enough was enough. "I guess in third grade was when I really worked," David said. "Third grade is when you really begin to think about stuff. I realized that I had this problem, and there was a solution. All I had to do was try hard, and it would come to me. I had to get used to saying that I had this problem, but I realized that if I just took my time, it would come to me."

Davis concurred with his mother. "I think I started playing football in second grade," he said. "I loved football because it did not have anything to do with school. I was able to get my frustration out with the reading and the math. I could literally take my frustration out."

Davis' ability in football developed later in elementary school. "I can remember in fifth grade, I went to the TR football camp," he said. "Coach (Shane) Clark gave me some award, and then I went back in sixth grade. At that point, I was told that TR was going to have a "D" (middle school) team, and that is where I began to excel."

He thought of football as his way to a better life. "When he realized he was good at football, it became his way 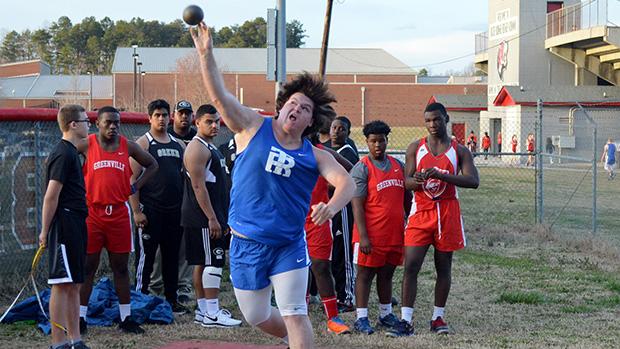 out of high school and into college," Tina said. "He did not think that academics were going to be his way into college, so he took advantage of football."

As Davis continued to excel in football in little league and up into the high school level, his potential started to skyrocket. Davis then became a starting defensive linemen for the Devildogs as a freshman. Davis was making a name for himself as a leader on the Devildogs' team until one night at Pickens. During the Devildogs' contest against the Blue Flame, Reid suffered a knee injury in which his ACL was torn.

"My first thoughts were that I was never going to play football again," Davis said. "I was upset. I was not sure why this happened, and I was confused. I knew that football was not worth putting my body on the line."

It was also difficult for his mother. "It was devastating," Tina said. "Football had become his life, and now he had to overcome this injury."

Nine months after knee surgery he was back and ready to continue his football career. Adversity would once again come into his life as he suffered a second knee injury during preseason workouts. At this point the future for Davis in football had come to an end, questioning his misfortune.

His mother saw depression in her son for the first time. "He did begin making the 'why me' statements," she said. "I think he took that so much harder because he viewed football as something that he had control over. His learning disabilities were something that he was born with, and he had no control over those."

After another period of time with rehab, Davis came to the conclusion that athletics were done in his life. He then turned, surprisingly, to the arts. Davis, who had always enjoyed being creative, picked up a camera and began taking photographs. He quickly realized he had a talent for photography.

"I had been taking pictures since the sixth grade," he said. "My parents got me a point and click camera. I thought it was fun to take pictures, show them to others, and see what they thought."

It was not until his sophomore year that he realized his potential. Annually, the state of South Carolina holds a "Reflections" contest for creative design excellence. The Devildog submitted a photo to be judged and he won first place at Travelers Rest and would later take second place at the state level.

"That was certainly it," he said. "I thought, 'Oh God,' people actually like my eye for things. I realized what I could do with a camera. Getting that feedback was life-changing." Davis changed his graduation plan and began taking photography and design classes at Enoree Career Center.

As his junior year progressed, he began to truly miss athletics. After consulting with coaches, he felt he would give athletics another chance. "I thought about it," he said. "Being in sports my whole life, I missed that feeling. I quickly realized that track and field was a totally different sport. It is a team sport, but it also very much an individual sport. There is not much team pressure, and I first came out with the idea of just having fun with it. It was good to have sports back in my life again. I am not sure where I would be without sports."

Davis gave throwing the shot put and discus a try, and quickly realized he had a talent for it. In his first year, the now thrower finished fourth at the Region 2-3A championships in shot put and advanced to the Class AAA qualifier. He was hooked.

"For me, if I get a taste of something that I like, I want to do it," he said. "A state championship in high school is all you dream about. I knew it was not going to come overnight. So, I practiced over the summer; I did Junior Olympics, and I lifted weights. I continuously worked."

Throughout all of this, he continued to excel in the classroom. His determination impressed many at Travelers Rest. "Davis is a mature student that recognizes and works towards a resolution instead of giving up," said the school's assistant principal Paige Baker. "He is always determined to do his best and uses many techniques in the classroom to aid him in his academic success. Throughout high school, he has taken the techniques and advocated for himself and his academics. I feel that he has matured and grown in his understanding of his deficits and will use what he has learned in high school to be successful in college."

With the graduation of several throwers, the Devildog quickly became the early favorite to be one of the top throwers in the Upstate. He has not disappointed. "In our third meet, we were competing against a lot of (Class) AAAA schools," he said. "They usually have better athletes, and I made it a goal to go after it every single time. A thrower set the standard at 43 feet, and I hit 46. I then hit 47 for the first time."

Davis has made a believer out of his coaches. "Davis is a coach's dream," said Travelers Rest High School coach Lindsay Baber. "I look forward to working with him every day. He is so much more than just an athlete. He is a role model, a leader, and a coach. He takes younger athletes under his wing and spends time motivating and encouraging them during practices and meets."

The thrower has hit his personal best throw of 47-11 twice, but has consistently thrown close to 50-feet in practice. He is currently ranked sixth in Class AAA. With this in mind, Reid wants to continue progressing at the  qualifier Saturday as the top eight throwers will advance to the Class AAA championships May 14 at Spring Valley High School.

"I have just really told myself that I need to keep calm," he said. "My dad said that this could be the last time that I throw, so I need to just take it all in. My mom said that I had already proven myself, so I am not going to let anyone down if I don't throw well. So, I am going to keep calm, but when I step into the ring, I am going to do what I have to do." 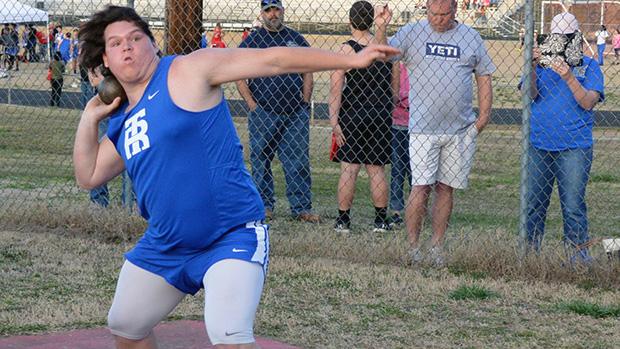 With this mentality, Davis has taught his coaches as much as he has learned from them. "Davis has an outstanding outlook on life," Baber said. "He brings joy to everyone around him. I have learned from Davis that it is important for me as a coach to encourage kids to be who they are. He is his own person and marches to his own beat. It is so important, especially for high school athletes, to remember that having fun and enjoying what you are doing is the most important part of playing high school sports."

Even if Davis does not finish qualify Saturday, it will not be the last time he will throw the shot put. He has accepted a preferred walk-on spot and has earned an academic and achievement scholarship to Savannah College of Art and Design (SCAD); one of the most prestigious art schools in the country.

"This is a school dedicated to making you better at what you want do in life," he said. "I loved the environment there because there are so many people from around the world. There are so many opportunities there."

Davis is planning to study film and television and minor in photography.

SCAD has been building its track and field program from the ground up. "They currently only have two female throwers, but they are working to improve and build their program," the senior said. "They already have a running program, but they are building their field events."

In June Davis will do something that his parents were told he would probably never do; he will earn his high school diploma. "To see him overcome these obstacles has been amazing," his mother said. "Originally the thought was that he was going to use athletics to get into college, but for him to use academics instead of athletics, that is what is most inspirational."

Students overcoming disadvantages to be successful is not uncommon. However, it is not every day that someone of Davis' stature is able to leap over hurdles that most would fall over. There is no doubt that he will continue to be a championship hurdler the rest of his life.

​Jonathan D. Duty is currently the newspaper adviser at Greer High School. Duty formally served as the head track and field coach at Travelers Rest High School. He has coached track and field in the states of Virginia and South Carolina for seven years. Duty, who was also the yearbook adviser at Travelers Rest High School for eight years, has been working in the field of journalism for over 15 years.