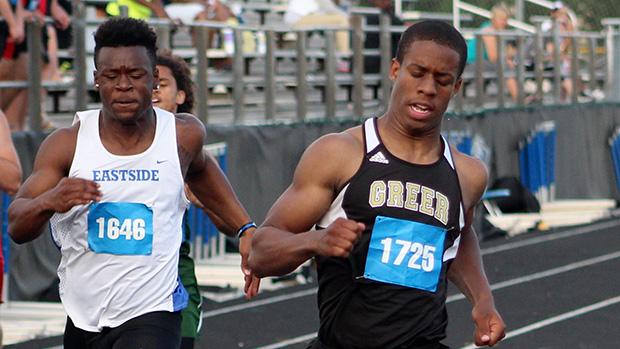 GREER - It is no surprise that Greer High School senior Troy Pride personifies the denotative meaning of his last name. The record-breaking Yellow Jacket takes "pride" in what he does; that is to win every race in which he competes. In addition, Pride has made a commitment to Greer High School; a pledge to compete at the pinnacle of his ability until the last race of his career.

Pride, who earned a full scholarship to play football at The University of Notre Dame in February, has given Greer fans, as well as fans from across the state, one more season of his brilliant sprinting ability. While other South Carolina blue chip track and field standouts Tavien Feaster and Samuel Denmark have either elected to enter college early or have missed much of the season due to injury, Pride has continued his onslaught on the state's sprinting times.

Denmark, who was a former state champion sprinter at Hanahan High School, has already graduated and enrolled at Virginia Tech. Feaster, a senior at Spartanburg High School who signed with Clemson, has sat out most of the track season due to surgery rehabilitation.

Pride said it was important for him to finish his high school career on a strong note. "I wanted to finish strong," Pride said. "I had huge goals before the season. I had the image in my mind of what I really wanted to achieve. I wanted to enjoy everything of my senior year. I wanted to stay in it, and finish strong. For the seniors on the track team, we have always been a success in football. We wanted the ring in football. To help those guys get one in track; for me to be an aide to get a ring, that adds more to the pot."

Pride was named an All-American Defensive Back for the 11-1 Yellow Jackets and was a 4-Star recruit. He has achieved many levels of success in athletics. However, Pride said he had one last goal before he moves on to college. 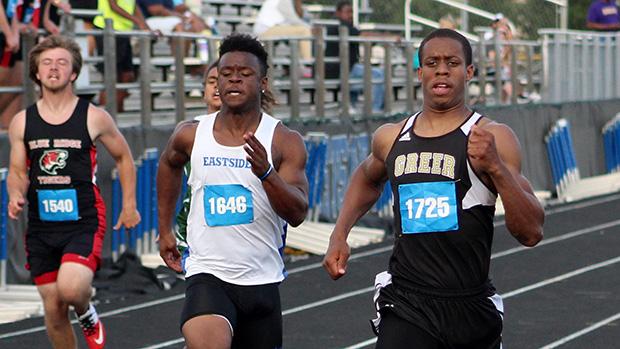 Pride's goal is to sweep the Class AAA championships in all four of the major sprinting events; a feat that will have to occur in less than three hours of competition time on Saturday at Spring Valley High School.

Pride said last year's state meet has prepared him for Saturday's gauntlet. "Last year prepared me for that," Pride said. "I know I have to be mentally tough. The preparation this year has helped me be focused, and to be ready to win these events. I know what I have to do now. Last year's meet set the foundation for what I knew I had to do this year."

Pride is currently ranked first in the 200 and 400 and runs a leg on the top 400-relay team; however, he recently only qualified third in the 100 behind Quincy Mitchell and Chance Walker of Hanahan and Swansea, respectively. "I like the position I am in right now," Pride said. "I did not maximize my potential (at the state qualifier). I was not going 100 percent. I like being that forgotten guy. Eventually, it all matters what you run at state. I know I will run my fastest time."

With a sweep from Pride, the Yellow Jackets will be in contention for a team championship Saturday; a goal they have been working towards the entire season. "They set a goal at the beginning of the year to qualify as many as they could for the state meet and a goal to win a state title," said Greer Coach Erie Williams. "They have had this goal since the beginning of the year, so hopefully, we can come away with one of the two trophies."

Pride currently holds the Greer school and Greenville County records in the 100, 200 and 400.

After two years of football and track and field, Williams will watch Pride run his final race as a Greer Yellow Jacket. That moment is going to be a tough one for the coach. "I am not prepared for that moment," Williams said. "I am sure emotions will be high. The moment will be great. It will be one of those moments that you will need to be there to understand and to take in. It will be one of those moments that I will remember for the rest of my life. He has helped me be a better coach and a better person. Being around him every day; his positive attitude and spirit has been great." 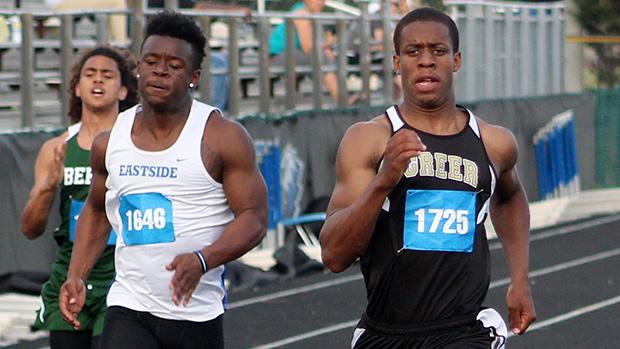 With consideration of his track accomplishments, Pride could be a dangerous addition to the Fighting Irish's track and field team. Pride's career best automatic time in the 100 (10.7), 200 (21.35) and 400 (48.02) would put the sprinter just outside of the top 10 list in Notre Dame history. "Coach (Brian) Kelly (Notre Dame football coach) is on board with dual sport athletes," Pride said. "I want to hit the ground running when I get there. I have always said I wanted to maximize my opportunity in college. I feel that Notre Dame can do that. Whether that is with track or football. I am continuously going to train my body and habits."

To the most pedestrian of track and field fans, the sprint races may all seem the same with respect to the athlete's preparation and execution of the event. Pride said the fan could not be more wrong. "I would definitely say the 100 is the more technically sound race," Pride said. "You have to be mentally tough. The 200, that's more of just running. You have to understand the different stylistically parts of the race. You have to be able to run the turn; to lean into the turn. The 400 tests your soul. That race sees how well you can deal with the pressure. Each race is going to challenge your body and mind and it is all about how you respond to it."

At the end of the day, Pride has extreme appreciation for what track and field has given him. "I felt like my track preparation has really prepared me for football," said Pride. "I feel that track has facilitated my skills on the football field. Track has helped me stay in shape, and to become a faster runner. I attribute a lot of my football success to running track, and I recommend a lot of football players to run track."

Track and field is also a big part of Pride's life when he goes home. Pride has two siblings that run track at other schools in Greenville County. Pride's younger brother, Chance, is a sophomore at Eastside and his younger sister, Trinity, is a seventh-grader at Riverside Middle School. Chance runs the 400 and participates in the 400 and 1,600-relays, while Trinity runs the 100 and 100-meter hurdles.

Pride said having everyone in the family involved in track and field has been a unifying experience. "I believe it is very important," Pride said. "Because it brings us together. We have been able to connect and bond. I can talk to my brother and sister at the table about their races. It allows us to connect through a different aspect."