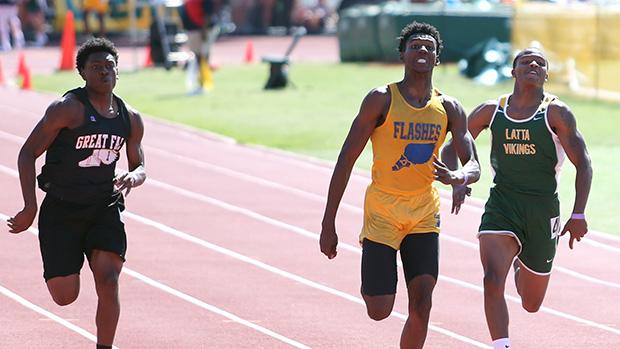 COLUMBIA - Considering how fast Tevin Richardson runs and how small Calhoun Falls is, you'd think he could cover the whole town in no time at all.

But it would probably take him longer than you'd think. He had trouble making it through the infield at Saturday's state track meet at Spring Valley High School without speaking to everybody along the way.

"I love everybody out here, the youngins, everybody," Richardson said. "I just want them to strive to be greater people. Everybody's born for success. Nobody's born for failure."

Richardson, a senior at Calhoun Falls Charter School certainly wasn't. He just had to find his niche.

He started on his path in the eighth grade when he went out for track. Assistant coach Rebecca Holland, who handles the sprints for the Blue Flashes, had Richardson running the 800.

"I wasn't that good," Richardson said, "but Coach Holland said, 'You've got to start off somewhere. I'm going to build you up into a monster.' "

The next year, Richardson moved to the sprints, and the transformation was under way.

By his sophomore year, Richardson had taken second in the state in the 400, fifth in the 200 and seventh in the 100.

Last year, he qualified for all three events again, but his day at state didn't start so well. He was disqualified in the 100.

"Nothing is anybody else's fault," Richardson said. "I take the blame for what I did. I did a false start, which I was mad about for a little bit, but I went back to my coach, and she calmed me down a little bit. I cried a little bit. Every man's going to cry."

Holland steered him back to the rest of the meet.

He arrived at this year's meet ready to make amends, conquer all three and perhaps add a victory in the 4x100. The Blue Flashes' relay team finished third.

Then came the 100 and with it a little flashback. Richardson couldn't help but think about being disqualified the year before. 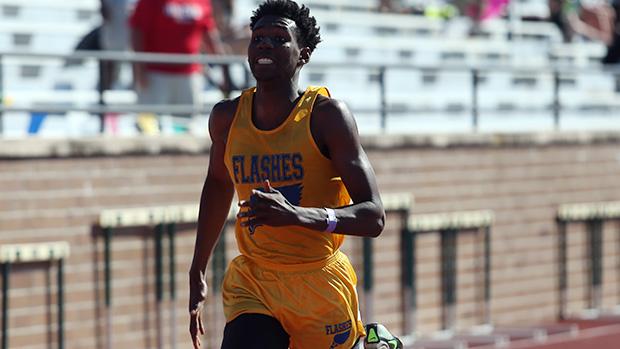 "I was a little scared," he said. "As soon as I was getting on the blocks, I thought to myself, 'I'm going to give this to God. God is the only person that can help me.' As soon as I came off the blocks, I said, 'Lord, please let me have your speed and strength to come off those blocks hard and finish strong.'

"I came away with a perfect start off the blocks, kicked in the straightaway, pumped my arms and I was there."

In the 400, Richardson said he came out a little slow.

"I was pacing everybody," he said. "I got around that curve, I turned it on, gave it everything I got. I could have given it more, though. I know I could have done better. There's always room for improvement."

"I was exhausted for the two," he said. "I kind of didn't want to get up. Everybody was like, 'Get your butt out there.' I gave it everything I had, pushed it to the max."

As he stood not far from the podium after stepping to the top for the third time Saturday, Richardson kept rattling off the team that keeps him going. 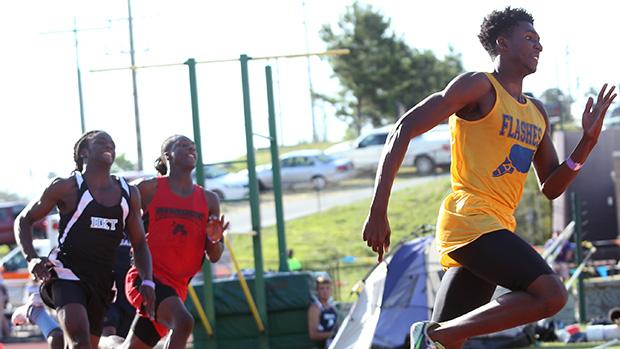 "I have a strong mother, my stepfather, my dad, my grandparents, my uncle, my girlfriend -- I just have so many people in my life that are pushing me," he said. "Without them and without God, I'm nothing."

His other team fared well, too. Calhoun Falls brought seven boys to the state meet -- not bad for a school with 230 students in the sixth through 12th grades. Led by Richardson, the Blue Flashes came in fourth place with 48 points.

Calhoun Falls is a town of about 2,000 in Abbeville County. The school board voted to close Calhoun Falls High School in 2008, but a charter school was opened on the same campus in the fall of the same year.

"The people fought to open it up again," Richardson said.

He's capitalized by making the most of his track and academic careers. Richardson has signed with North Greenville University, and he plans to pursue a career in nursing.

He hopes to travel around, but Calhoun Falls will always be home.

"It's a great town," he said. "The people are nice. The school? the teachers are going to push you. They're going to make sure you get that work done.

"There's no crime, just peace and harmony. You've got nothing to worry about."