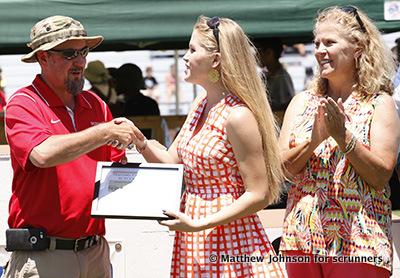 COLUMBIA - A senior track and cross-country runner from Camden High has been named the first recipient of the Sharonda Coleman-Singleton Memorial Scholarship.

Dave Lee, president of the SCTCCCA, announced the award to McLaughlin on behalf of the coaches association.

Lee said the association voted last summer to establish the scholarship in response to the June 17, 2015 shooting at Emanuel AME Church in Charleston.  Nine people, including Singleton, were shot to death during a church gathering that evening.

The Rev. Singleton was track and field coach at Goose Creek High School, and part of the ministerial staff at Emanuel AME Church.

"The scholarship is based on the ways coach Singleton lived her life around the six pillars of character: trust-worthiness, respect, responsibility, fairness, caring and citizenship," Lee said.

McLaughlin, who will be attending Winthrop University this fall, said she's "honored to be named the first recipient of such an award and grateful for the opportunity.  It means so much to me as a cross-country athlete.

"I've learned so much about leadership and teamwork, and what it means to persevere through obstacles," she 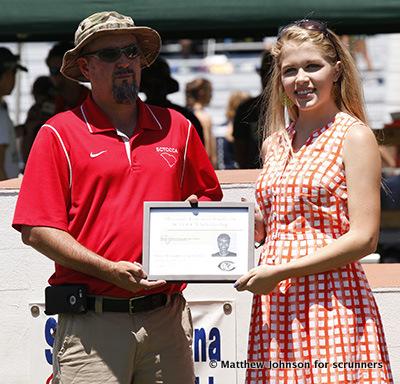 said. "It's really helped shape me into the person I am today."

Eric Cummings, coach at Riverside High and a member of the SCTCCCA board, credits Westside High coach Debbie Croxton for getting the scholarship process started.

"She began selling t-shirts last year and a lot of the money has come from that effort," Cummings said.

He and Lee then came up with a set of criteria for the applicants, approved by the full board last summer.

"A big basis, as far as criteria, was the character of the recipient," Cummings said.

Fifteen athletes applied for the scholarship through their individual coaches.

"We had a good group of applicants, but Abigail consistently stood out among the committee members," Cummings said.

He said the annual scholarship would be paid each year directly to the winner's college or university.