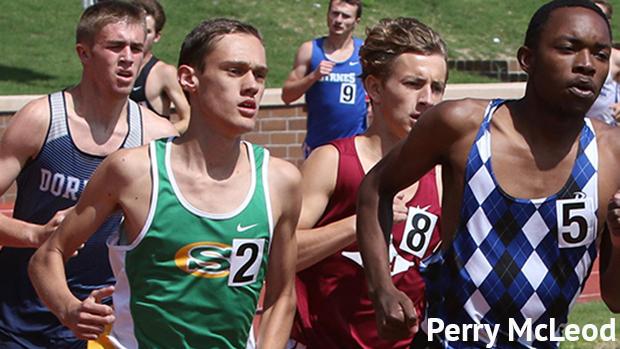 SUMMERVILLE - While the best of this year's state high school track and field athletes are preparing for this weekend's SCHSL state championships, at least one of those performers who will be on the track Saturday at Spring Valley's Harry Perone Stadium could be excused for having at least one eye on next fall and the 2017 cross-country season.

Last October, Summerville High junior Victor Shellhammer and others were helping remove a tree and debris left in the family's back yard following Hurricane Matthew. The tree fell in Shellhammer's path, a glancing blow that nevertheless left him with a skull fracture and other injuries.

Shellhammer, then the number two runner on the Green Wave varsity boy's team, was hospitalized for a week.  He would not return to competitive running for three months, his doctors urging him to avoid running altogether for a while, then only resume training at a gradual pace.

Shellhammer said he has followed doctors' orders, though not without some frustration.

"I wanted to get back to running cross country," Shellhammer told scrunners.com. "It's what I like to do."

Still, Shellhammer vowed early in his rehab that he would, at the least, get back to where he was in his running prior to the accident, while keeping the goals he had set for the spring running season.

By this past January, Shellhammer and his coach, Kelly Hazel, felt Shellhammer was ready to resume practicing with the track team.

"He rejoined us at the end of January," Hazel said. "At first, he wanted to do everything everyone else on the team was doing, but I wouldn't let him."

"I told Victor I wasn't going to let him run a 32 because I felt it was too much running for him."  His conditioning still wasn't where it needed to be, given the long layoff, Hazel said.

Shellhammer was cleared to participate in full workouts with the Green Wave boy's track team around the time of the Bob Jenkins Coaches Classic in late March, she said. "He still couldn't do as long a run as everyone else, but full workouts."

Hazel said she hasn't been surprised by Shellhammer's relatively quick recovery from the injuries.

"He's very much a chaser when he runs; when you put him on the track he works hard," she said. "He's such a great example for our team."

Shellhammer placed seventh in the 1600 at the Class AAAAA qualifier. He's hoping for a top-five finish in that event at the state meet Saturday morning. He will also run the second leg for a highly ranked Summerville team in the boy's 4x800.

Once the track season ends, Shellhammer will get together again this summer with his cross-country teammates, and he also intends to participate in a few 5K's to gauge where he's at physically going into the 2017 cross-country season, especially after missing the final month of the 2016 season.

"Hopefully, next year I can set some records for myself and end my high school years with a big bang."