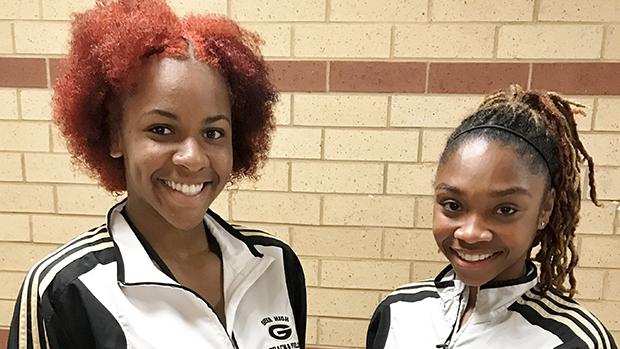 GREER - In track and field, the heptathlon is designed to judge which female is the most outstanding all-around athlete as she is asked to compete in seven events over a two-day period. Greer High junior Kaiya Bradford and sophomore Eboni Balsley have combined to create one outstanding heptathlete.

The Yellow Jackets' dynamic duo has combined to qualify for six individual events in Friday and Saturday's Class AAAA Championships at Spring Valley High School. This is the second consecutive year that the Yellow Jacket pair have qualified for six events.

"I think they bring a standard of expectation for themselves and the other females on the track team," said Greer Track and Field Coach Erie Williams. "They are a duo. They feed off each other's successes. They are definitely rooting for each other. It is good to see them fighting for each other and encouraging each other."

Even though the Yellow Jackets have only qualified the pair of athletes, Greer will still compete to finish in the Top Five of the team standings. The Yellow Jackets finished in sixth place at last year's Class AAA meet with 37 points after Bradford's and Balsley's performances.

"That is our goal," Williams said. "We want to make the top five at the state meet."
Bradford is a link in a lineage of Greer track and field athletes. Her mother, Janelle Rice-Bradford, ran track and field for the Yellow Jackets before graduating in 1987. Kaiya's older sister, Kari Bradford ran for the Yellow Jackets in middle school before transferring to Greer Middle College Charter.

Kari was a nine-time state champion in the high jump, 100 hurdles and 400 hurdles before graduating in 2014. Kari is currently a junior heptathlete on the South Carolina State University team. To round out the family tree, Bradford's father, Eddie is an assistant coach on Greer's track and field team.

Due to her family's history, Bradford began competing when she was young. "I started when I was six-years-old," Bradford said. "It has always been a passion for me, and I always want to be better at it. Seeing that everyone in the family is part of it, I have to strive to be better than them." 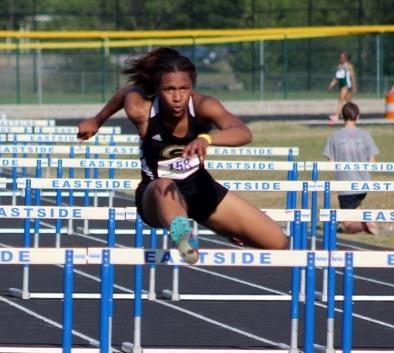 Bradford spilled the beans on who the best athlete in the family was. "(Kari) is better at longer distances than I am," Bradford said. "But, strength-wise, I am stronger."

Bradford is known for high-jumping and hurdling, but it was a hurdle that sidelined her this year. At the Chick-fil-A Games early in the season, Braford landed on a hurdle and injured her right knee and ankle. Since then, she has been fighting to get back in championship condition. Needless to say, she has done it.

"Kaiya has done a good job handling the pressure all year," Williams said. "Dealing with the pressure of injuries, and to get back in shape; it is a testament to her hard work and motivation. Her self-motivation is impressive."

Bradford's career best in the three events are: five feet, four inches (high jump), 14.77 (100 hurdles) and 34 feet, 11 inches (shot put). She is currently seeded second in all three events. That second seed or second-place finish is becoming all-too familiar for Bradford. In her previous 12 state qualifications, Bradford has yet to win a state championship.

"It is certainly something that I want to achieve," Bradford said. "I just need to focus and do the best that I can do, and it will come."

Williams echoed her thoughts. "It is all about timing, "Williams said. "She just needs to make sure she is doing the right things at the right time, and she will be okay. It will come."

Bradford will compete in the shot put final at 7 p.m. tonight and then later compete in the high jump at 8 p.m. The rest of the duo's events will occur on Saturday.

Competing with Balsley has been a good experience for Bradford. "It is companionship," Bradford said. "Every year, it has always been us in the end. We compete together in summer (AAU) track. It has been great to see her continue to grow and be successful."

Bradford's goal is to run track in college. She would prefer to run where it is quite hot. "I would like to go to Florida State or Florida," Bradford said. "I like the warm weather."

Balsley, who has been competing for the Yellow Jackets since the seventh-grade, enjoys running and jumping. "I find it fun," Balsley said. "I like to win medals. I like the competition."

Balsley has learned a lot working with Bradford. "I have learned to never give up," Balsley said. "No matter how much you are hurt. After Kaiya got hurt this year, she just kept working on it. She never gave up."

Balsley goal for this weekend is purely a personal one. "I am trying to gain new PRs (personal records)," Balsley said. "I mean, I am a little scared, but I want to do the best I can do. I want that ring."

Balsley said her goals are to run track in college and possibly compete in the Olympics one day.

Williams has been impressed with Balsley's leadership style. "She is quiet and more reserved," Williams said. "She leads in her own way. She walks up to someone who has had a bad day and speaks to them and asks if they are alright. Anytime your top athletes take the time to check on somebody; that is great."

Williams said everything clicked for Balsley during her freshman year. "She was almost there her eighth-grade year," Williams said. "She was just about where she needed to be in the 400 hurdles. But, she got it last year. She understood what she had to do. Now, she is competing at her best during the biggest meets. All of her best times and distances are coming at the right time."

Williams, who is in his 11th year as head coach, has had many dominant athletes in the past, but has high hopes for his duo this weekend. "My hope is a PR for each," Williams said. "I just want them to be at their best. I want them to have their best times, best distances and best events. If they do that, let the chips fall where they may."

No matter their performance, Williams will have the duo for one more year. "We hope to continue to build on what they have done with other athletes," Williams said. "We have a lot of young and talented athletes, and we just need to keep building."

Even though there is no heptathlon at the state championship meet, fans will constantly see and hear the duo over the two-day period. They have definitely become quite the athletic duo.