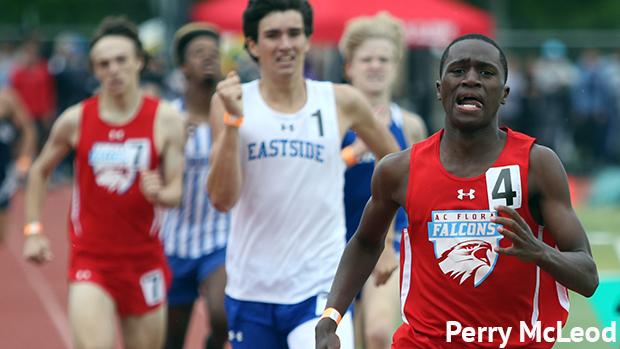 COLUMBIA - Tyler Jeffers wasn't feeling good about his chances in the boys' 800 meters, especially following a 50-flat effort in the 400 just an hour earlier.

Not only did his time earn him a South Carolina high school state championship for 4A boys in the 800, perhaps even more gratifying for Jeffers was knowing that his late father was just as proud.

"I think my dad was looking out for me in that race," the younger Jeffers said shortly after his win during the SCSHL State Track and Field Championships at Spring Valley High. "I really wanted to win for him."

Jeffers was in seventh grade when his father died from heart failure. Tyler was getting ready for school one morning, but missed the bus. When he went to his father's bedroom he found him unresponsive in his bed.

"The doctors said he died overnight in his sleep," Jeffers said.

Jeffers quit running that year, returning in eighth grade to honor his dad.

Though his father wasn't a runner, he encouraged Tyler to pursue athletics throughout his childhood. Tyler was a football wide receiver in middle school, but gave up that sport when he got to high school and focused solely on track and field.

On Saturday, Jeffers stayed close to the front early, then made a move just past the half-way mark.

"The first lap, I just stayed with the pack," Jeffers said. He picked up his pace with 300 meters to go.

"My adrenalin started pumping at 200, so I kicked it and I was like a second ahead of everyone else," he said. His winning time was six seconds faster than his previous best in the 800.

"My dad was definitely looking out for me in that race," Jeffers said, but his mother also had a hand in the championship performance.

"My mom always wanted me to get a ring, and I finally got one for her," Jeffers said. It comes just in time for Mother's Day.

"It was a perfect ending to a perfect season," he said.