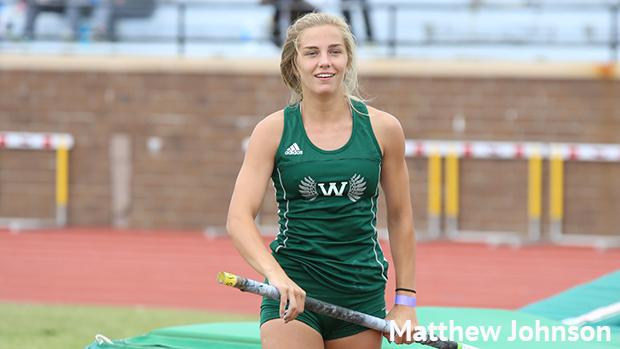 COLUMBIA -- As much as anything, Sommer Knight is an athlete who has found the pole vault to be her calling.

She did gymnastics as a youth, she sprinted for Woodland High School and she could have played college volleyball.

Woodland's Knight 'Always Competing Against Myself'

But on Saturday, in the state track and field meet at Spring Valley High School, Knight set the state record in the pole vault, clearing 13 feet while helping Woodland to the Class AA championship.

It took some time for her to settle on pole vaulting as her specialty, but that's what Knight, a senior at Woodland, will be doing at East Carolina University.

When Knight was a freshman, she was still a volleyball player. But Woodland had a new teacher, Ariel Domke, who wanted to coach the pole vault, an event in which the school had not previously competed, and head track coach Chavez James asked Knight if she would give it a try.

"It was hard. It was definitely a challenge," Knight said. "I did gymnastics when I was younger, so it kind of helped a little bit with some of the drills, but it was definitely a new sport. I had no idea. It's like no other sport."

She said the high-bar work they did in the pole vault was similar to what she had done in gymnastics, so at least that made the transition easier.

Still, it took that whole first season to get comfortable with the movements and the event in general. Knight made it to state and placed fourth.

"My coach puts it in our mind a lot that we just need to contribute to our team, because we're always in the top three in the state overall," Knight said, "so I was really excited to come contribute points for my team."

The next year, Knight began contributing even more points.

"We lost a lot of seniors after my freshman year," she said. "We had a really good 4x1 my freshman year. Our coach really didn't know what he was going to do, so he lined all of us up one day, and we had a 100 race in practice, and I won."

Knight wound up on the 4x1, and she's been running ever since.

Not many pole vaulters compete in the sprints, which can make for some interesting conversations off the runway.

"They find it kind of odd," Knight said. "If pole vaulters do any other event at all, it's usually hurdles, just because of the technique and how we run it's kind of the same, and when they find out I'm a sprinter, it's like, 'What? You run the 200?' "

As for the pole vault, the good news about her freshman year was Knight made it to state. The bad news as far as she was concerned was she failed to PR, which happened again the next year. Even though she took fourth again as a sophomore, she was less than thrilled with her performance.

As a junior, Knight reached a PR of 11-6 and won the state championship.

"State turned into more of a positive meet for me," she said.

That's also when track turned into more than a hobby.

After she won the state title, Knight was contacted by North Greenville University.

"I was focusing on both track and volleyball, because I didn't know which one I wanted to do yet," she said. "I was saying, 'I'm going to see where it goes,' and I ended up excelling at track and getting better offers for track."

After hearing from North Greenville, Knight began talking with South Carolina. Then she starting talking with some Division II schools but just about running, and she wanted to pole vault.

That's when she began contacting schools.

"That's how I really got the bigger schools interested in me," Knight said. "I reached out to them."

East Carolina came into the picture only recently.

"East Carolina kind of took a chance on me, because when I went up there to visit about a month ago, my PR was only 11-7," Knight said. "We got up there, and it was just really good chemistry with the coaches and they really like me and I just loved it up there.

"He was like, 'We're going to give you this little bit of money, but if you jump higher, you'll get more. After that, I just kind of relaxed, because I was just focused on, 'I have to jump higher to get a scholarship.'

Knight said she began her senior season with a big-picture goal of clearing 12-6, but she broke it down into smaller goals, the first of which was to qualify for nationals. Needing to reach 11-9, she achieved that the second week of the season.

Then she pushed for the championship division at nationals, 12-4, and she cleared that two weeks later. At an open meet at USC about a month ago, Knight made it to 12-7, reaching her goal for the season.

"Then I figured out the state record was only 12-8," Knight said. "I tried not to set my sights on the state record. My coach didn't want me to, because she knew I was capable of higher than that, and I have a bad habit of just reaching for a certain bar, instead of broadening my horizons a little. So she set the bar at 13 for me, and we just started setting a bungee at about 13-2, and I just looked at it every day and jumped every day, and that helped a lot when this happened, so I was kind of more relaxed about it."

The whole broadening-the-horizons idea paid off, because when Knight was in the moment, the state record was merely a steppingstone.

"When I was going over, it was dragged on my knees a little bit, and I was like, 'Oh, I'll get another jump. But then I pushed off and it stayed up."

Suddenly the new record was 13 feet.

Next up for Knight is New Balance Outdoor Nationals June 16-18 in Cary, N.C. She's had to adjust her goal a few times.

"When I qualified for nationals originally and I was in the emerging elite bracket, I knew I could get a medal because the top jump is only 12-4," Knight said. "Then when I qualified for championship and eighth place is jumping 13, I'm like, 'I'm probably not going to get a medal, but I want to be exposed to those high vaulters getting ready for college, because that's what it's going to be like. Everyone's going to be jumping higher than me.

"Then about a week ago, when I started clearing 13 in practice, I was like, 'You know, maybe I can actually do something at nationals.' So I'm definitely looking forward to it. I just want to PR. The goal all the time is to PR. No matter who's there, no matter what everybody else is doing, that's always the goal."