All season, the Eastside boys cross country team had one goal: to finally bring a state championship back home.  It had not happened since 1988.  We had fallen short of our goal many times before - five times in a row to Hilton Head - and were prepared to do whatever we could to change that this season.

The boys had committed themselves to strict training and endured the pain, suffering, and time commitment it would take to have a chance at a state championship.  They took of themselves: kept themselves well hydrated on a daily basis, made sure they got an adequate amount of sleep every night, and even avoided halloween candy this week just to make sure everything would work out just perfectly.

Five months later, the state championship finally arrived.  We were confident in our ability and our training.  But the guys also knew that they would need to have the best run of their lives to win.  Hilton Head has a tradition of running their best races when it means the most.  We expected that.  And, as expected, the Hilton Head crew had a great race.  So did we.  But we still lost. 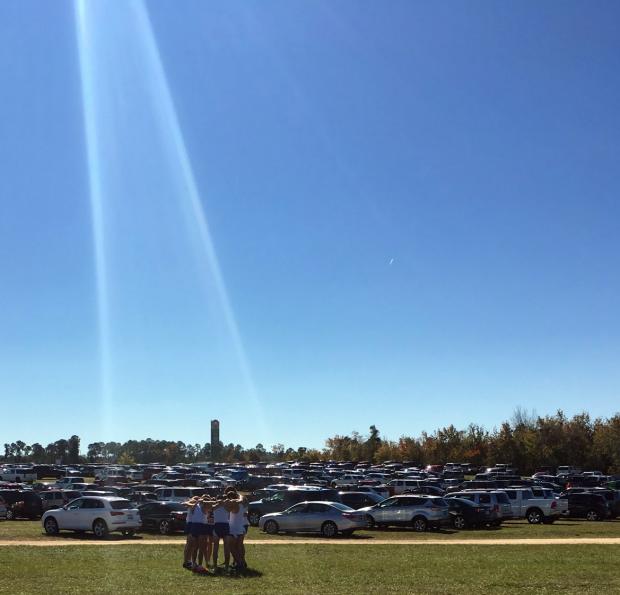 With 800 meters or less to go, we were up by about 30 points.  We had four runners in the top 10.  Our fifth runner was in the top 25.  We had somewhere around 50 cumulative points.  After our sixth and seventh runners passed, I sprinted toward to finish line, eager to greet the boys with a congratulatory hug.  As I neared the finish line, I saw Luc, one of our top runners, struggling.

He was leaning forward way too much and looked off balance.  I yelled at him, "Luc! Walk! Walk!"  He collapsed to the ground and got up, repeatedly, only to fall back to the ground over and over until finally his body failed him.  He fought until he could not anymore because he was running for his team.

We ended up being the state runners-up for the sixth year in a row, this time by two points.  As we mourned over the loss of a championship and the uncertainty of the health of a teammate, a brother, we also saw the Eastside community and alumni come together in a way that I have not ever seen.

Many prayed, many cried.  We all stood or kneeled in solidarity.  We saw the care of runners from other schools who tried to provide water and help in any way they could.  I saw humility and care from coaches  and members of the Hilton Head team.  I think we are all reminded in moments like these that cross country is about much more than championships.

It is about a brotherhood, a sisterhood.  It is a community to belong to. Most of all, it is about love for each other.  I don't know why God allowed that to happen to Luc, but there is one thing that God spoke to me in the hours after his collapse:  remember why I called you into coaching.  It is about loving these kids.  Not about championships, rings, honors and certificates.  Luc was released from a hospital in Columbia later that night and is doing well now.  We are so grateful for the prayers and love sent our way from many of you.

Eastside will continue to strive to be the best cross country program we can be.  But this past weekend, we were reminded that cross country is about much more than that.  It teaches us to endure hardship and that there is no better award to receive than true community and love.