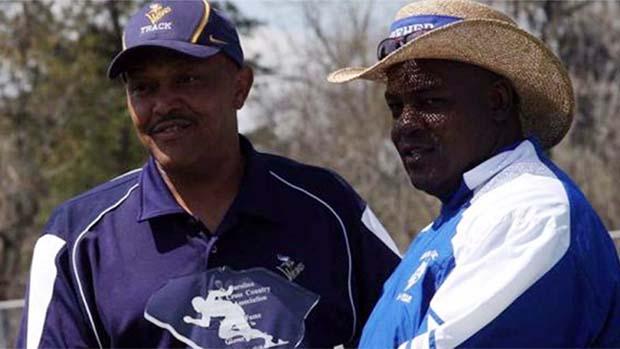 "He has earned his wings," Daniel Brooks of the South Carolina High School League said during a phone call with scrunners Monday afternoon.

The South Carolina Track and Cross Country Coaches Association released the following statement, "The SCTCCCA is saddened to learn of the passing of Hall of Fame Coach Glover Smiley from Spartanburg High School. Coach Smiley is a member of our SCTCCCA Hall of Fame, inducted in 2010. Coach Smiley has been a positive influence on countless athletes at Spartanburg High School and across the state, and he will be missed. The association offers its condolences to Coach Smiley's family and friends."
Spartanburg County School District 7 released the following statement on social media:
Our District 7 family is deeply saddened by the loss of one of our most beloved community members, "Coach" Glover L. Smiley, Jr., this morning. Coach Smiley officially retired from District 7 in 2020 but has remained involved in numerous ways since that time.
"Glover Smiley was an icon of Spartanburg School District 7- a dedicated member of our Spartanburg High School guidance department, head track and field coach, and so much more for nearly 30 years," reflected Superintendent Jeff Stevens. "His loss is a tremendous milestone felt by legions of people whose lives he touched, both within and beyond our District Seven community. Coach Smiley brought distinction to our district as a trailblazer, having become the first African American head coach of any varsity sport at SHS; through his legendary success for our track and field program; and through his personal and professional recognitions at the state, regional and national levels. It was his positive and monumental influence on the lives of individuals, however, that earned him an unparalleled place within the hearts of so many. No one better reflects the mission, vision and values of District Seven than Glover Smiley. Our hearts are broken as we grieve losing this beloved member of our Viking family, and we express our deepest sympathies to his family."

scrunners.com will provide more information as it becomes available. Read tributes below.

Read a 2009 interview with Smiley here

EXTREMELY blessed to have called this great man a mentor! I want to send my sincere condolences to the Smiley family and that entire Spartanburg community. We loss a legend but, his teachings will live on forever through all of US that he has touched. https://t.co/GP5thlYxmH