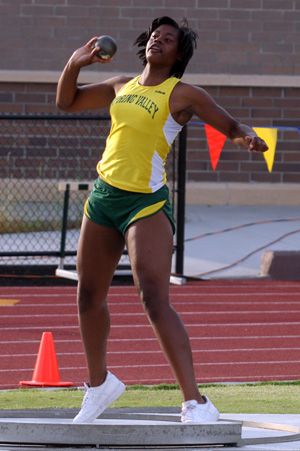 McDaniel, a multi-sport athlete for the Vikings, won the competition by over four inches.

Watch an interview with McDaniel.

In the team competition, three Class AAA girls teams are tied for first with 10 points (Daniel, Fort Mill and Seneca), after two events. Both Eastside and Greer are tied for fourth with eight points.

After five events, Beaufort has a 12-point lead in the Class AAAA team scores with 32 points. Wando is second with 20 and Mann, moving up from Class AAA, rounds out the top three with 19 points.

Dorman is tied with Fort Dorchester in the Class AAAA team competition with four events scored. Both have 19 points. Wando is third with 15 points and Spartanburg fourth with 13 points.

The meet at Spring Valley was delayed Friday evening due to storms in the area. Action is scheduled to resume this morning at 8 a.m., meet management told scrunners.com. Warmups for the boys Class AAA triple jump and Class AAAA pole vault will start at 7:30 a.m.