Submitted by Richard German, a student-athlete at Charleston Southern University.

Final day in Oregon
I didn't have to compete and neither did any of my teammates. Instead, we ate food. Coach and I watched the senior women's hammer throw that featured last year's champion and this year's runner-up Amber Campbell, who throws for the same club as coach Aydlette (Mjolnir). 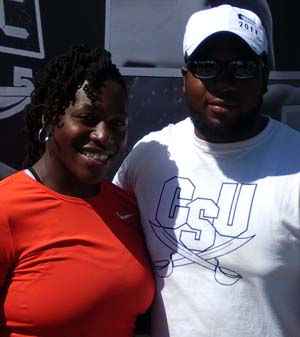 Amber scared us half to death when she entered the last round and having only been in fifth place with a throw of about 67-meters. On her last throw she delivered a very clutch performance and three a toss of 70.02-meters, finishing second. This was the craziest competition I had seen.

Afterwards we waited around with Amber's family and coach. We then took a picture and congratulated her once again. We then hung out the rest of the day until our flight out of Oregon at 10:50 p.m. that night.

This concludes my time in Oregon.

Today Friday, June 24 started off really well and ended great too. Coach and I left the hotel around 8:45 a.m. for the track and on the way we stopped for donuts at a local place called Voodoo Donuts. They sell all types of donuts, including a maple bacon donut and a peanut butter Oreo® donut. It was very different.

After that we got to the track. I then had to check in at 9:50, an hour before my scheduled event. I ended up throwing a distance of 53.64 meters (176') which was not enough to break my previous school record of 56.53 meters or put me in the finals, but it did rank me 14th out of 20 in the nation for the 6K hammer throw. Which I'm proud of, considering all the other throwers had been throwing for a couple years and this being the first year I had thrown hammer!!

After the competition coach and I went to eat lunch at this Hawaiian Time restaurant, which I thought was great for a first time eating Hawaiian food.

Before returning to the hotel we went to visit distance runner Steve Prefontaine's tribute. He died of a car wreck on May 30, 1975. This would conclude the day other then doing some homework for a summer pre-calculus class I'm taking.


So today was a good day. We started the day off around 9:45 as we headed to the track. As my teammates did there shake out coach Josh and I walked around and looked around and I also got my hammer checked in for the next day.

We didn't do much today because we just wanted to get used to the time change and have a day to relax. We ended up going to the mall for lunch and after that we headed back to the track. 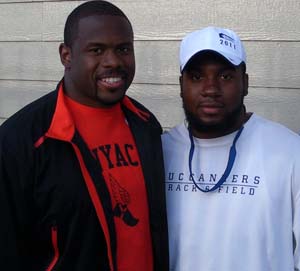 When we got there the senior hammer throw was just about to start. All of the athletes were really good. The winner of the competition was Kibwe Johnson who I later spoke to and took a picture with after the competition.

His words of advice for me were to "keep throwing." By this he meant that its going to take a lot of practice and reps. It took him a long time to get where he is at. He has been throwing for 10 years, which is a lot longer then me.

As I said previously, I have less then a years training in this event. After I talked with Kibwe we left for dinner and then came back to the hotel as I called it a night to prepare for my event the next day.

I graduated from Wando High School in June of 2010. I was born in Yonkers, New York but grew up here in Mount Pleasant. In high school I was on the football and track team where I served as one of the team captains for both sports, only to go on to college and only continue in track.

This event that I will be competing in on Friday is actually a new event to me. We didn't have the hammer throw in high school so I guess you could say I picked it up pretty quickly having less then a years experience and managing to qualify for USATF Junior Nationals. I couldn't have done so with out the given opportunity from head men's track and field coach Tim Langford as well as my throwing coach Joshua Aydlette. I just want to thank them for there time and effort, more so to coach Aydlette being the one who works directly with me the most.

So, it is about midnight here in Eugene, Ore. and we are just getting settled in our rooms. We left for the airport in Charleston this morning around 10:25 for our 11:45 flight to Atlanta. We then had a layover until 4:35 for the next flight to Portland after arriving to Atlanta around 1:30 p.m. Our next flight was delayed until about 6:20 because of bad weather in Atlanta.

After we finally made it to Portland we still had a two hour drive to Eugene.

The trip went pretty well besides the delay and the bad weather. This is something new for me having never left the east coast until now. I have been up and down the coast from New York to Florida but never to the west coast, so I'm really looking forward to the rest of the trip and competing here.

I will have to get used to the time difference first, but it shouldn't be too bad considering we are only three hours behind Charleston. Well that's all I have for the first day and I'll be in touch with you soon.