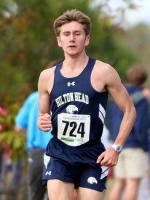 Sort By:
Filter By:

Hilton Head duo pushes each other toward success...
HILTON HEAD ISLAND – The loss of one of the state’s top high school cross country runners to graduation this past year isn’t expected to slow Hilton Head Island High’s boys team in 2014....

Hilton Head in good position for another title run...
HILTON HEAD ISLAND – Over the past four years, the boys and girls cross country teams at Hilton Head High have either finished as state champs or runners up, and both teams are in very good positio...