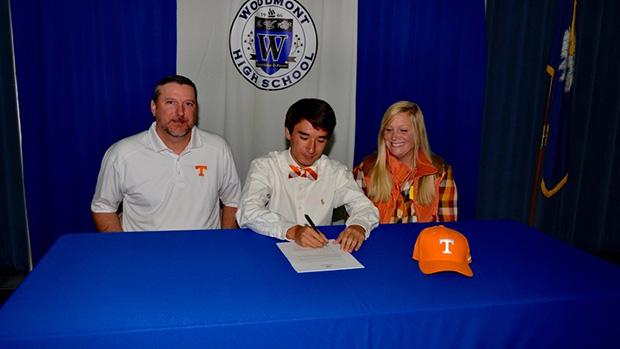 What made you decide to sign to Tennessee?
It was both an academic and athletic decision. Academically, Tennessee offers the major I wish to study. As for athletics, the atmosphere on campus as well as the attitude of the coaching staff made me feel welcome. I believe that running for the University of Tennessee will allow me to reach my potential as a runner.

How did you make the final decision and who was involved?
I loved Tennessee as soon as I stepped on campus. I toured other colleges in the following weeks, but I kept thinking back to Knoxville. When I went back for my official visit, I was still amazed, especially getting to see the athletic facilities. At the end of my visit, I spoke to the coach and committed. My parents have been the most influential people in the college process. They have guided me along the way and provided me with valuable insight. I can't thank them enough for all they do for me.

What did you experience on each visit?
On my first visit I got a general feel for the campus environment and learned more about academics. On my official visit I was able to learn about the unique opportunities available as a student athlete. I toured the facilities and met the various members of the staff for cross country and track athletes. The head coach, Coach Sullivan, was very optimistic about the program and everyone only had good things to say about her. Hanging out with the team allowed me to see myself calling Tennessee home.

How did you get involved in the sport and why?
I went to Wren for middle school, but we moved that summer and I was going into my freshman year at Woodmont. I didn't know too many people at this new school, and my parents wanted me to do something, so I decided to run cross country. I didn't have any major experience with a sport before that point, but I had done decently on the mile in gym class (mid 7s if anyone was curious), so I thought it was a decent choice. I ended up liking the team and doing well. Three years and a few thousand miles later, here I am.

What has been your biggest challenge?
One of my biggest challenges was following my sophomore year at the cross country Region 1-4A championship. It had been a personal goal of mine to be region champion, but in the final mile of the race, I lost the lead to Elisha Smith. In the final 400 meters, I began to close the gap between us; however, I couldn't catch him, losing the race by a couple seconds. I was disappointed and unsure of what this loss indicated for my performance going forward.

What did you learn from the experience?
I learned that loss is what you make it. You can let it control you or you can learn from it and let it serve as motivation going forward. I decided to learn from that loss at region and I changed my training. I listened to the advice of my family and coaches. I expanded my focus, taking diet and strength training into consideration along with running. The following two years, I have been blessed to repeat as region champion.

How is training now that the season is over?
Training will be geared towards track preparation. I'll be increasing the mileage, combining longer runs with tempo runs. This will provide a solid foundation for spring.

How do you look at your time at Woodmont?
My time at Woodmont has allowed me to develop as both an athlete and a person. Coach DeRoberts, Coach DesChamps, Coach Bill, and Coach Theresa have provided me with advice and encouragement to be my best on and off the track. I can't reflect on my time at Woodmont though without thinking about my teammates. The team has been one of the best parts of my experience. I've been honored to be captain of the team for the past three years and I have seen it grow tremendously through hard work and passion. I hope it will continue in its success long after I'm gone.

What will you miss the most?
I will definitely miss my teammates the most. I'm blessed to have my running ability, but my greatest memories from high school running won't be the accomplishments. The good times I had with my teammates in and out of practice will be what I look back on.

How do you rate this season?
It was a successful season. I dropped my PR by 20 seconds, broke the school record, and claimed a region title with the guys. It didn't end on the best note, but reflecting on it as a whole, it was one of my best seasons.

What would you say is the biggest memory you have?
My biggest memory from cross country was this season at the Region 1-5A championship. We fought hard and won the race, but the significance behind it stretches back to the previous season. For the 2015 season, it had been our team goal to win region. We built up the expectations and made it our top goal only to fall short on race day. I believe we came into this season knowing what we had to do. We were hardworking and persistent, and when the time came, we performed. This race served as a culmination of our efforts and represents the work ethic of our team.

What do you hope to study and otherwise achieve in college?
Academically, I'm pursuing studies in nuclear engineering. Athletically, I would like to contribute to the team by scoring at meets. I don't know how far I can progress with college-level training, but I'm positive that I will work to my potential and be the best runner I can be.

How does it feel to have the decision made prior to the season?
It's great having the college decision made. I can focus on enjoying my senior year in high school and preparing for what's to come.

How did the Tennessee coaches react when informed?
Coach Anderson was glad to have me make the commitment. They have been working to build up the program, and I'm proud to be a part of that process. The vision for the future is bright ... bright orange.