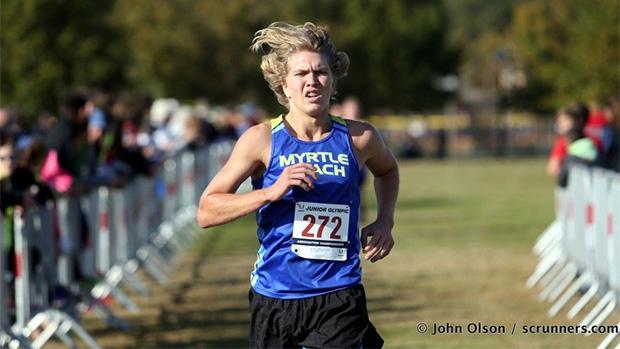 What made you decide to sign to Anderson?
Everything in the past led paved my path to be a Trojan. I attended Palmetto Boys State and got to meet a lot of the staff at AU who were caring, supportive and God-driven people who would sacrifice their life for you, even they didn't know you on a personal level. An amazing friend of mine, Jesse Patrick, is a student-athlete running for AU who got me in touch with Kevin, the head coach. From there Kevin took me under his wing and helped me with any questions I had regarding Trojan Cross Country and Anderson in general, which really showed that AU and everyone there cared about not only your performance both academically and athletically, but your overall well-being.

How did you make the final decision and who was involved?
After making the visit to meet Kevin and some of the other guys on the team, my dad and I knew it was the one. Each told us about how much the teachers cared for your learning experience, the coaches cared for your overall health and the Trojan Community cared for your well-being and we knew from then on that God led us to Anderson and put us there, that day, for the reason to make the decision.

What did you experience on each visit?
Though I did not formally visit AU, from Palmetto Boys State and the meeting with Kevin and the other guys, I gained a lot of knowledge about the campus life and what AU had to offer academically. In the past, I got the opportunity to attend chapel in the past, which I dearly loved.

What were your top five choices?
Prior to making the final decision of AU, I narrowed my list down to USC Upstate, Presbyterian, Wofford, Catawba and Anderson of course.

How did you get involved in the sport and why?
My grandfather made an impact on my decision of beginning cross country and track, which I'm not even sure he is aware of. He thought I had health issues, regarding my weight, when I was in the seventh grade so I figured I'd try to find a way to get him out of that mindset. I heard the announcements at school one day mentioning a sport with the name of "cross country," which I had absolutely no idea what it was at the time, so I figured I'd give it a shot. Little did I know that day was a scrimmage meet and I had to race with the only exercise being my trips from my room to the fridge. Surprisingly I fell in love with the team, the trails and the sarcastic comments made by my friend and coach, Robb Urbaniak. Robb kept me interested in the sport and friends along the way such as Nick LeFever, Elijah Lawson and Austin Goss kept me involved with the sport.

What has been your biggest challenge?
Physically, my biggest challenge was that of seventh grade. I ran a 17:58 two-mile time trial and had a lot to overcome if I wanted to be anywhere near decent.  Minor challenges included fracturing my pinky toe on a pool lawn chair in ninth grade and a few pulled muscles here and there.  Mentally, I had to get over being the last person on the JV team for a year. Charles R. Swindoll once said "Life is 10 percent what happens to you and 90 percent how you deal with it" and I've lived my life with that in mind for the past five years.

What did you learn from the experience?
Experience is the best tool for learning, and I certainly will use what I've done at Socastee to help me at AU. I've learned that if you want to be successful, you have to put in the work. The years go by fast so every year matters. The worst feeling to have is regret, and regret is inevitable and impossible to ignore. If you want to be successful your senior year, you have to do the work your freshman year.

How is training now that the season is over?
Prior to finishing states, a teammate and I, Nick LeFever, planned some races for us to do when the season ended. Recently we competed at the S.C. USATF Junior Olympic meet here in Myrtle Beach, but we also have Dash for Doobie and NXR Southeast planned for the upcoming weekends. We've been doing workouts given to us by our club coach, Jei Richardson, to keep in shape.

How do you look at your time at Socastee?
Every minute at Socastee has allowed me to become the student, runner and person I am today. Coach Urbaniak, Melko, Musser, Renfrow, Grega and Hudson have given me the knowledge and motivation to be the best I can be both as a runner on the trails and the person off of them. My teammates, including those that have already graduated such as Will Caswell, Austin Poisson, Will Vaught, Christin Talbot and countless others, have shaped me to the young man I am today as well and I wouldn't feel morally in the right state of mind if I didn't take the chance to thank them in this article, for I may never get the opportunity to thank them in person.

What will you miss the most?
I will most certainly miss Robb. A coach that makes something that can be so unenjoyable into something that positively changes every aspect of your life is not your average tool in the shed and is most certainly one that is taken for granted. After both junior and senior year, I realized how blessed I was to have a coach like Robb. The bus rides with my team are definitely memorable, including the cry of "It's Bo Time!" after passing any Bojangles. Singing Miley Cyrus, Katy Perry and Journey from the top of our lungs will most certainly be missed and the team in general will forever be remembered.

How do you rate this season?
Although I want to say the season was a 11/10, I think I may have to be satisfied with only a 10/10. I PR'd almost every race and learned a lot about each teammate, gaining a personal connection with everybody, but I didn't quite hit my goal of acquiring the school record. That didn't bother me too much though. Whether I got first, second, or 41st, I left every meet with a smile and a good memory.  I can't thank my team and coaches enough for giving me a senior year I will never forget!

What would you say is the biggest memory you have?
Besides stuffing ourselves at Golden Corral? Playing 2K in the hotels? Having basketball games and dinners at the Phillips house? That's a hard question. Nonetheless, my most memorable occasion is getting $40 to eat a pickled pigs foot after our race at Great American XC Festival in N.C. Everyone was chanting my name. Running wise, the most memorable race would be our Lower State Qualifier meet this year at Wannamaker Park. The group of guys I raced with stuck in a solid pack until the last 300 meters and the scenery in that race was amazing.

What do you hope to study and otherwise achieve in college?
I plan to go to AU to major in pre-engineering and minor in economics. Furthermore, I plan to transfer or bridge to Clemson, study electrical engineering and hopefully run with them for an extra year or two.

How does it feel to have the decision made prior to the season?
Certainly, after seeing how much stress my classmates put on themselves with college applications and college acceptance, I am very thankful and relieved I have made my decision early. I can now use this time visualize my future as a Trojan and train, plan and study for a successful academic and Athletic career at the collegiate level.

How did the Anderson coaches react when informed?
Kevin was certainly as happy as I was! He is certainly someone who, for as long as I've known him thus far, cares for you and your future. Even if I hadn't of chose AU, Kevin would have been happy for me and my extension of both my academic and athletic career which I love about him.

Get all of MileSplit's hottest content delivered to your email inbox!