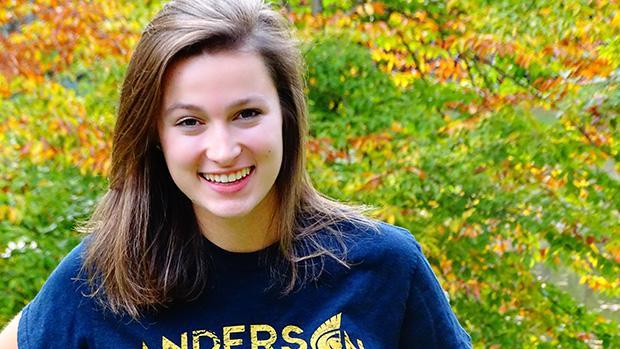 What made you decide to sign to Anderson?
I struggled a lot between going Division I and Division II. A part of me really wanted to go Division I to prove that a homeschool athlete could do and accomplish just as much as any other athlete, and certainly, homeschool athletes are no different than any others looking to run in college. However, I had to step back, take running out of the picture, and choose where I thought I would flourish and grow the most. Anderson was where I could picture myself excelling both academically and athletically for the next four years.

How did you make the final decision and who was involved?
Loads and loads of thought and prayer were poured into my decision. I asked advice from as many people as possible as I tried to get different perspectives and opinions. My parents and coach were definitely the most involved and were such a huge help.

What did you experience on each visit?
I gained so much knowledge and really grew as an individual through this experience. The coaches, students, professors, and admission counselors were all so kind. Each campus that I visited was impressive and had excellent qualities. Also, I learned so much more about running from the coaches I met, and I gained a great perspective on my major at each school.

How did you get involved in the sport and why?
I would say I was thrown into running in a way. I wanted to pursue tennis or soccer but decided to try running first. The first week of practice, we found out my grandfather was dying, and so, my mom was out of state continuously throughout the year. Our family continued on with what we had begun and just stuck with running. By the time things had settled down and returned to normal for our family, I had fallen in love with the sport. Actually, my whole family had, and we never looked back.

What has been your biggest challenge?
Throughout my running career, injuries have been my biggest struggle, for sure. The combination of trying to recover and the mental battle of getting back to 100 percent are really tough.

What did you learn from the experience?
More than anything else, dealing with injuries has pushed me to take advantage of the times when I'm not injured and be thankful for the ability to run. With a season like this senior cross country year, I approached every workout and meet telling myself that I was healthy and strong and needed to take advantage of that and leave nothing out there.

How is training now that the season is over?
I just finished my season out with Foot Locker (South). Now, I will keep my endurance up and then break for a little while in December before I start training for track season.

Any top events already preparing for the upcoming seasons?
I'm looking to especially work on my mile in track season. I improved so much last year, and now, I want to get as close to breaking five minutes as possible.  I'm really looking forward to running Coaches Classic where there is awesome competition, and I'm hoping to have a really strong showing at my last Spartanburg County. Also, I love finishing the season out each year with the Meet of Champions.

How do you look at your time at Carolina Homeschool?
The past seven years have been such an absolute blessing. Running has become my life, and the people I get to run with every day are incredible. Our team has had some ups and downs as far as being allowed to compete in certain events over the years, but in reality, we are all the same. Whether public, private, or homeschool, we are all high school student-athletes who line up at a starting line ready to race our hearts out.

What will you miss the most?
I will definitely miss the relationships I have had with my teammates. They have meant the world to me these past several years. We are really like one big family.

How do you rate this season?
I'm really pleased and feel very blessed about how I did this season. I never imagined I would run in the 17's or finish with the #1 time in the state. Although I am very thankful for my success this season, I really try to forget about all of that when I go out to train or compete and just focus on doing the best I can.

What does it mean to have people know your name and your performances in the state?
If my times and performance mean that people know who I am, then I hope to point that acknowledgement to God. I don't run for trophies, medals, or praise and admiration. I run because I love the sport and the constant challenge it provides.

What would you say is the biggest memory you have?
The biggest memory for me was this year's Spartanburg County Cross Country Championship. I felt like I had a lot to prove to myself and others coming off of the Starlight Reservation. I had set as my goal to run an 18:30, and I was able to finish at 18:19. I felt great that day and ran my fastest time ever at Milliken.  However, my biggest memory from that day was how our team was able to pull together and place second in county. Almost every single girl on our team PR'd. We had set specific goals for ourselves that day, and we surpassed them. It was an incredible experience!

What do you hope to study and otherwise achieve in college?
I plan on getting a bachelor's degree in nursing with a minor in Spanish. Academically, I hope to be as dedicated and disciplined as possible. Athletically, I hope to work together with my team to accomplish the goals we set for ourselves. I know Coach Licht and the girls have tremendous goals for the next few years.  My hope is to step in and be an integral part of Anderson reaching that level of success.

How does it feel to have the decision made prior to the season?
I feel so relieved! I had set as my goal to make my decision by mid-November, and the time leading up to that was very stressful. I'm glad to finally have gotten all of that behind me so that I can just focus on track season and finishing out my senior year.

How did the Anderson coaches react when informed?
Coach Licht was super excited, but I know that he would have been just as excited if I had not chosen Anderson.  He said from the beginning that he wanted to see me flourish wherever I chose to attend.  We share the same vision of my goals for college and for the team's goals. I'm very excited to be a part of the program.