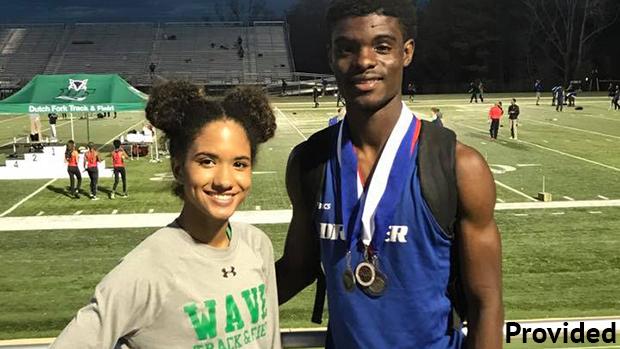 Two South Carolina high school track and field athletes, both currently at the top in their respective specialties, have much more in common than rankings.

Though not related by blood, a bond has nevertheless solidified this season between Jacory Patterson and Imagine Patterson, and their two families.

The two are top-ranked juniors at their schools; Dreher High for Jacory and Summerville High for Imagine.  Both said they knew of each other's success in track and field, and quietly started pulling for each other last season.

Then, over the summer, both were invited to compete in the USATF Junior Olympic Track and Field Championships held in Sacramento, Calif.  The two families got together during that late July weekend, a long way from home.

"We do high school and summer track together, so it's like we are on the same journey together with the same last name," Amy said.  As to whether Jacory and Imagine are "cousins", Amy said, "They really aren't cousins. We pretend like we're cousins. It's a big joke between us."

The fact that both students are accomplished athletes helps fuel the bond between the two Pattersons, she said.

"They're both good athletes and we'll start cutting up at the meets. We call them the Patterson takeover," she said.

The two have certainly "taken over" in the latest state rankings; Jacory ranks first in the 200 meters and long jump, and Imagine first in 100 and 400 hurdles.  Both should be favorites in those events at region qualifiers next week and at the state championship next month at Spring Valley.

Imagine said she and Jacory have developed a "good track friendship" over the past couple of seasons, even though they don't see much of each other during meets.  The two usually cross paths and exchange encouragement in warm-up areas.

"We'll see each other and wish each other good luck; that kind of thing," Jacory said.

Like their children, the two Patterson families eventually get together at the meets.

"It's a long day and our family doesn't normally sit in one place all day," Amy Patterson said, but by the end of the day "we usually find each other."

"They are just a really nice family and we always join up together."