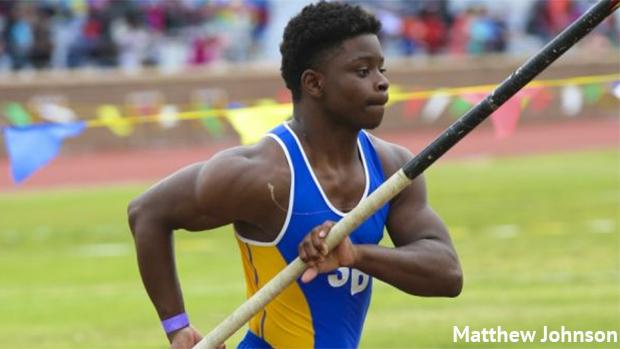 COLUMBIA -- Vaquan Wilder had been feeling the heat all week, and it didn't get any easier when Saturday rolled around, when it was time for the Class A state track and field meet at Spring Valley High School.

Strangely, Wilder, a junior at Scott's Branch High School, didn't have to worry about whether anyone else would perform better than him in the pole vault competition. That wasn't his concern.

"I was my competition," he said.

Wilder was the only one entered.

He wound up winning the state championship by clearing 10 feet, and in the process he helped Scott's Branch win the state title. But Wilder had to clear a few mental hurdles along the way.

Wilder is a good all-around athlete, a three-sport athlete before track ever entered his mind. He starts at strong safety and also plays running back for the football team, comes off the bench as a defensive specialist for the basketball team and starts at shortstop for the baseball team.

He's also No. 5 in his class academically, maintaining a 4.0 grade-point average.

"He's a big track guy, and he wanted all of us to run track, and I just wanted to pole vault, so I did that, too," Wilder said.

So as a sophomore, Wilder began pole vaulting, largely because the track coaches suggested that few people do it, and Wilder said, "I want to be the crazy one and do it."

He said he surprised Farmer by qualifying for state last year. Wilder finished fifth -- out of five -- by clearing 9 feet.

"He didn't really think I was going to make it last year because it was my first year," Wilder said. "When I made it he was kind of astonished."

This year, Wilder achieved a PR of 10 feet in the Region 5 meet. He cleared 9-6 in winning the Lower State, and he was the only vaulter in the competition.

He had a feeling he might be the only one at state.

"I didn't really know what was going on in the Upper State, but I kind of knew," he said.

Wilder's suspicion was confirmed at a team meeting early in the week, when Farmer told him he would be solo in the pole vault competition at state.

However, that didn't ease his mind because he had just gotten a new pole the day before the Lower State meet.

"I was nervous all week long," Wilder said. "I didn't know if I was going to clear anything because I just started using a new pole Monday."

On top of that, Farmer made sure Wilder had specific goals.

Wilder made it to 10 feet, securing both the title and a ring.

And Wilder said he has no problem with Farmer prodding him.

"He's going to push me in everything I do," Wilder said. "He also helps me in life, because I want to go on to the military, and he was also in the military, so he's kind of guiding me through that process, too."

Wilder plans to attend Georgia Military College, major in exercise science and then, after getting commissioned in two years, go on to physical therapy school.

He has a lot going on, but he's not without a plan.