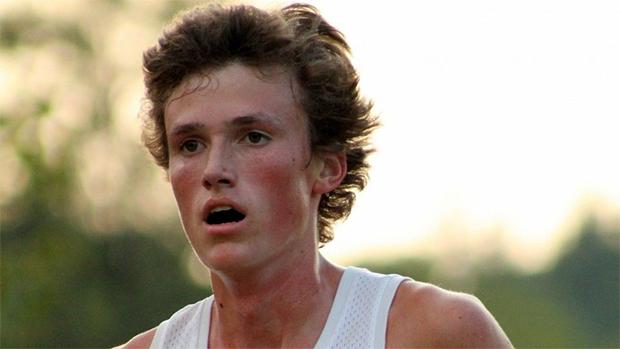 What was your most memorable race/competition?
The 3200 of the Taco Bell Track Classic my Junior year. Everything came together that race after a rough start to the season. Keep reading to know more.

Out of all your high school accomplishments, which stands out the most?
Making it to State this year in the 3200. I have been trying for so long to make it to State in Track and my desire has finally been quenched (placing second in cross country at state four years in a row came close though).

If you could do it all over again, what would you change about your athletic career in high school?
I would not idolize the sport as much as I have in the past. I would not take racing so serious and simply loosen up and would have fun. I'd be content with the simple thrill of running! I would acknowledge the opportunities that running offers more often and I'd be more thankful for each chance I have to run. Truly, it is a gift.

What were the most difficult obstacles you had to overcome?
I had gotten very sick towards the end of my sophomore year of Track. When I tried to run hard it felt like someone had a rope tied around my chest and was pulling me down.  The doctor said that it was bronchitis. I took medicine but it never truly went away. The region meet was soon approaching and Coach Lucking was doubtful that I could even compete. I decided to press on, placing second in the race to a teammate in the last 50 meters. Next, I ran poorly at Qualifiers due to my sickness. It, the feeling, never really went away. One year later it reemerged. I was out of training for about three weeks right at the start of the season. After many doctors' visits I was referred to an allergist. Low and behold I am allergic to grass, trees, and weeds. How ironic for a runner! I was given an inhaler to use before I ran. What a gift it is, being able to breathe! The Taco Bell meet was the first meet where I was able to compete fully. I ran a 10 second PR of 10:06, I started the race in dead last and slowly worked my way up to finish second in my heat, losing only to a teammate!

Briefly, another obstacle was receiving a stress reaction (like a stress fracture but not as severe) at the end of this past Cross Country season. My foot began to hurt with two weeks of the season. I decided to push through, I had never been injured before and thought very little of the pain. I ran on an aching foot at State, missing All-State, Shrine Bowl Team, and Team State Champions for the fourth year in a row. I was devastated. How could this be? This was my senior year, my time to succeed. I was mad at God and myself, potentially if I had run what I wanted to run I could have had a gold medal, not silver, around my neck. The following week I went to the doctor for X-rays and found out that I had a stress reaction. I could not run for 2 whole months. God was gracious to me, He taught me so much through this, and a renewed love of the sport was given to me as well.

What will you miss the most?
Without a doubt my teammates. They are a bunch of hooligans and get into mischief all the time. They are my brothers.  "A man who has friends must himself be friendly, But there is a friend that sticks closer than a brother." -Proverbs 18:24  This verse describes them perfectly.

Do you have any advice for younger athletes?
Yes! See each day as another day in which to excel. Every step, every breath is such a gift. Don't waste it. Don't worry about times, rankings, or what you eat before the night before a race all that much. Anything can happen on race day. Compete with heart. Know your reason for running, define it, and once you do your motivation for the sport will grow as will your desire. Set hard goals for yourself. Enjoy the PRs, even if they are only a few seconds faster than your previous PR. No one ever regretted doing their best. There is a different between being disciplined runner and a runner who idolizes the sport. Learn to rest occasionally, you are only human. After a bad race, mourn for a minute then press on. Don't let a sour note define your season.

How have your coaches influenced your performances and life goals?
Coach Travis Alexander taught me to persevere, even when the odds were against me. Coach Ed Boehmke taught me to smile and to thank God the same way for the outcome of each race, good or bad. Coach Scott Lucking taught me to believe in myself and to understand the meaning of discipline. Coach Rob Henderson taught me to not be so tense all the time, to loosen up and to trust in the ultimate plan God has for me. All of these men helped make me who I am today. They all taught me the value of hard work, it does pay off tremendously.

What kind of impact did your family have on your time as a high school student-athlete?
My Brothers (Ben, James, and Daniel) all ran. They taught me how to love the sport.  They all are full of encouragement and grit as they push me to be better than they were. My parents have been like my brothers and have enabled me to compete by their support by buying bananas and bagels, making pasta once a week, coming to my meets, etc.

What are you college or post high school plans?
I plan to attend Furman University this fall on an ROTC Scholarship.

What do you hope to achieve after high school?
I hope to graduate from Furman with a degree in Exercise Science/Kinesiology with the goal of becoming an Occupational Therapist. I will definitely keep running while at Furman with the running club there, as I still have a desire to compete. I also plan to serve in the military upon graduation from Furman as a Second Lieutenant in the United States Army.

Do you see yourself coaching the future? Please explain and if so, what level and why?
I definitely would love to coach on the high school level. The passion for the sport is clearly evident on this level; the young eagerness can be easily molded into something greater. High school is such a key component in life and I know that I could be very influential as a coach.

Shout-outs?
Those Hilton Head boys sure know how to keep a team humble.

If there is one thing in the world you could do, what would it be and why?
Travel back in time to meet 1924 Olympic Gold Medalist in the 400 meters and bronze medalist in the 200 meters, Eric Liddell. Meeting this great, God fearing man would be such a pleasure and experience.
Lake Murray: JV boys Lake Murray Invitational Sep 20, 2011
Tweets by scmilesplitus