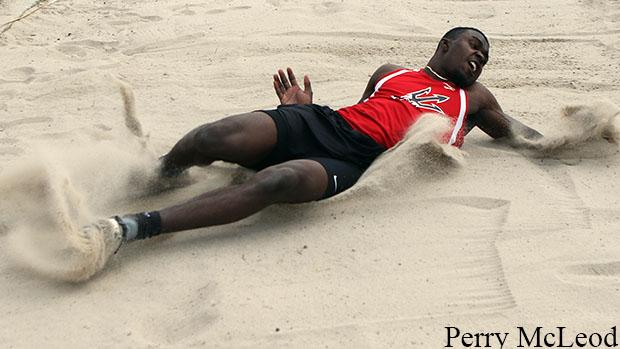 King edged Jonathan Miller of the St. Michael School in Barbados by a little over one foot.

The new high mark for King was 1 inch better than his previous best set a month ago at the Golden Corner Invitational in Seneca.

King, who will enroll at Stanford University this fall, turned in his best jump on his final attempt, smiling and clapping his hands as he exited the pit.

King jumped 49 feet, 7 inches in his first attempt, then scratched on his second try before landing his record leap on his final attempt.

"Everyone out here was jumping big, but the pressure was forcing me over the edge," King said. "Right as I landed on my last attempt, I looked back and I knew it was out there. I didn't expect it to be a 51-4," he said.

Miller, who jumped immediately after King in the finals, scratched on all three attempts. His final, non-qualifying effort measured 51 feet, 5 inches.

"It was a great jump, and I think it would have won had I not faulted," Miller said following the competition.

King has set some lofty goals for the months ahead, including hopes of competing in the NCAA championships next year as a college freshman.  He also hopes to jump 53 feet in the not-to-distant future.

"That's always my top-end goal," he said. "It keeps me from putting a cap on myself and getting complacent."