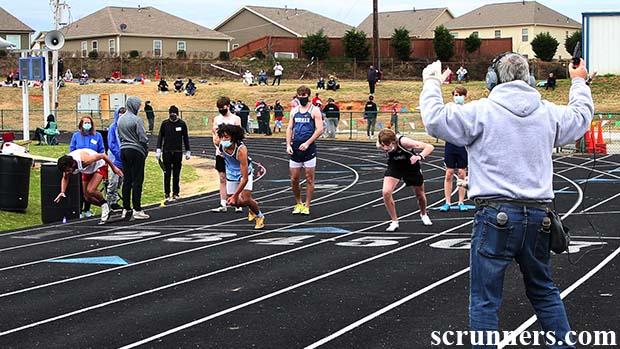 These views are solely those of the author.

The organization of track and field meets is an incredible endeavor in a "normal" year.  The COVID-19 pandemic and protocols presented to us have changed the entire landscape and has made the organization and subsequent meet itself a meet directors nightmare.

A track meet is like a road race.  Race directors in our club will understand that the success of a race is all determined by the preparation before the race even happens.  Ordering your awards, getting people to help in various places and times, working with outside agencies for security.  And many other things, that even with experience, can become a heavy burden on the race director.  Unless you have been a race director, you will not understand the organization and preparation involved.  These people are the lifeblood of our club, all of which deserve our utmost appreciation.  The pandemic did not make our races easier, only gave our race directors more things to consider and do.

High school track and Field (and cross country) last fall is no different (view 2020 season coverage).  Unless you have been the meet director for a track meet, most people have no idea of the work and preparation that is involved in making the meet successful.  I have been the race director for a few GTC events - Greer Road Race (half-marathon and 5K) and The Greenville News Run Downtown 5K (Kerrie Sijon did most of the work) and I can say that the details in both are of the utmost importance and each offers unique challenges.

Unlike road races, track events at least have their own facility.  There is no need for us to monitor vehicle traffic (but we do foot traffic). Our competitors are spread out over 18 events for both genders.  A track meet usually starts around 9:00 in the morning and can extend well into the afternoon.  Some of the very large meets may go into the evening or be spread out to two days.  It is essential that each of our events start on time so that there is no dead time between the events (like waiting for the awards at road races) and our spectators and athletes know when things are happening.

In a "normal" year, the organization of a track and field meet begins a year before by setting a date for the meet.  Like most athletic events, the date usually stays the same weekend every year.  After last year was cancelled, I set the date for this year's meets, but then, in September, the South Carolina High School League pushed our State Championships  later by one week, which then changed the calendar for almost every meet.

With new dates set, I then had to face the challenges of our school district.  In January, Greenville County Schools told all of the Athletic Directors that track meets had to be restricted to 500 athletes and no more than five schools in attendance at the same time.  This put us in a turmoil because every meet that we host has at least 1,000 athletes and 16 to 30 teams.  I talked with the (Greenville County Schools) District Athletic Director and he said that the restrictions were for regular meets during the week when schools would ultimately bring their entire team to a meet.  With many teams in Greenville of 100 or more, this would quickly cause a problem.  The district was concerned (and rightly so) that track meets are very social events among the athletes and the athletes have a lot of free time to mix with their competitors as well as their own teammates.  He then asked me to come up with a plan for our big meets and show how we would attempt to keep teams, athletes and spectators away from each other.

Here is what we came up with for all meets

Limited the number of relays per school to one.  Previously each school could enter two teams in the sprint relays, 4 in the distance relays, and 3 in the field relays.

Limit the number of schools to 20.  Last year (the last track meet in the state) we had 33 schools.

Limit the number of individuals per event to 2.  Last year it was 3.

Limit the number of relay teams to 1.  Last year it was 2.

Split the meet into two days.

Split the meet into two days. (Which is we changed to one day and spread it out.)

Divide the schools into two divisions - Previously only one division.

Limit the number of entries per event to two.  Previously three entries.

This was the plan we presented to the superintendent and he approved.  We made all of the necessary changes to our meet information and sent it out.  I had a zoom meeting with all of the county track coaches and explained what we had to do at Eastside and what they had to do as a coach and a team for us to have a season.  A few of the large meets across the state got cancelled in February and made us wonder if the district would make us do the same.  One large meet that Hillcrest was going to host was moved to Seneca because it would have had too many teams.  Thankfully, our district is committed to all activities for our students and allowed us to continue with our plans.

Because of all the athletes from a lot of different schools, the precautions we are taking may be a little overboard but extremely necessary.  In a team sport, if someone tests positive just after a contest, there are only two schools involved that may have to be shut down for 10-14 days for quarantine.  But in track many teams or parts of teams may be shut down.  As an example, in the shot put we will usually have 20 to 50 competitors.  To keep things smaller, we divide the group into groups called flights.  Before Covid, a flight would have around 18 athletes.  Now we have reduced that down to 10-12.  It takes a little longer with more flights because you have to give the next flight time to warm up before they compete.  If one of the competitors test positive for Covid, then it is possible to have to quarantine all of the competitors in the flight.  Those athletes travel to other events and into their team camps.  We have made marks near the jumping and throwing areas for the athletes to stand and wait their turn (like you see in all stores now).  This keeps them apart.  We don't let flights mingle with each other.  And if the team areas are monitored by the coaches, then the team members are away from each other.  The contact tracing becomes very minimal because of our efforts.

A meet has to have a time schedule, a timer, and many officials.  Luckily, all of the coaches that wanted to come to Eastside to have a meet have jumped in and helped in all of the capacities that they were needed on the day of the meet.

But COVID forced us to design areas for each team to set up their "team camp."  If any of you have been to large track meets, the first thing you will notice is all of the tents that are all over the stadium.  This year we asked teams NOT to bring tents because the athletes want to sit under them.  A 10'x10' tent will only hold 4-5 athletes that are socially distanced and a team of 25-50 cannot sit under one.  Each team still had to have a place to set up, have room to be socially distant and be away from other schools.  We divided the football field into 22 areas that are 36'x36' which we felt was large enough to accommodate the athletes that were not presently competing.  I assigned each school an area and sent that to them with all of the other protocols that we were following.

We had to hire extra security for all of the meets.  Their job was to keep the spectators in the home stands and in the extra areas that we have assigned for them to watch specific field events.  Of course, we were often on the PA system asking people to follow all of our protocols.

So far, all of our plans have been successful.  Not once have I been called to discuss the possibility of Covid-19 at one of our meets.  The season still has a few weeks to go, but if we can remain diligent with all of the protocols we have established and take those same protocols to other meets around the state, then I feel very confident that we can finish the high school track season with a successful State Championships week in late May.

Ed was the Head Boys and Girls Track and Cross Country Coach at Eastside High School for 38 years.  His teams won three state championships, seven state runner-ups, and numerous region championships.  He has been the Meet Director for the Coaches Classic, S.C. State Championships, and the Chick-fila Games, as well the Greenville County Cross Country Championships and the Greenville County Track and Field Championships, which he started the girls' division in 1977.  He has also hosted state and regional Junior Olympics in both track and cross-country. He is very active in the S.C. State and Cross Country Coaches Association having held every elected and appointed position in the organization, including serving as President from 1988 - 1992.  He is also very active in the Greenville Track Club having been a member since the middle 1970's.  He has helped with many road races including race director for the Greer Earth Day Runs and co-race director for the Greenville News Run Downtown Race.  He has worked with many of the GTC All-Comers Meets and the GTC SC Masters Track and Field Meet.  He is a current board member serving as an At-Large member.  He has been selected to five different Hall-of-Fames - Berea High School Athletic, USATF/S.C., Greenville Track Club, S.C. Track and Cross Country Coaches Association, and the S.C. Athletic Coaches Association.  He retired from teaching in June of 2016 but still continues to be a meet director at Eastside, hosting some of the largest meets in South Carolina.  This year marks the 45th straight year he has directed the Greenville County Championships.

Links to other articles by Ed Boehmke on SCRunners

A Tribute to Jim Mattos

Is Greenville County  The Best In The State

A Course is a Course