There have been three generations of Golden boys and girls in track and field. No one has to look much farther than Seneca to find them. At the head of the table is former Seneca track and field coach Fred Golden.

"I think (our dad) would tell you he's very proud," Northan said. "To have two sons graduate from the Air Force Academy and have two sisters with PhD's, we've all been successful. Everything we did we were taught to do it right and at 100 percent."

His teams produced 40 individual region champions and 12 individual state champions. He started the first organized cross country team at Seneca in 1980 and named to the school's athletic hall of fame in 2010. Prior to his coaching career, Golden ran track at Claflin from 1957-60, where he was the two-mile champion in 1959.

Golden's oldest son, Northan Golden, feels his father has been a solid example of strength for his entire family. "My mom died when I was 12 of sickle cell, and Dad raised all four of us," he said. "Track and field has really become a family affair for the Golden household. We've always loved and embraced sports, but somehow we've gravitated to track and field. We really like track because we feel it's a complement to the real world."

While accumulating championships and legendary status, coaching his four children is quite likely Golden's top prize. He led all four from 1979-85. In addition to Northan, there's son Tracey and daughters Tera and Trixie. Each were state finalists in several events most notably the long and triple jumps. Northan was a member of Seneca's 1981 state runner-up team before becoming a sprinter, long jumper and triple jumper at the Air Force Academy. He was the team's captain and co-most valuable player, as well as holding the long jump record from 1985-2004.

"I think (our dad) would tell you he's very proud," Northan said. "To have two sons graduate from the Air Force Academy and have two sisters with PhD's, we've all been successful. Everything we did we were taught to do it right and at 100 percent." 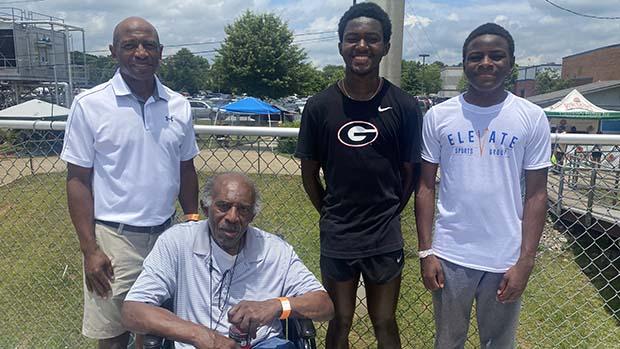 The Golden tradition continues on with Northan's two sons Robert and Matthew. Robert is a rising senior and honor student, while Matthew is a rising ninth grader and honor student at Heathwood Hall. Robert was co-captain, all-region and all-state selection for last year's SCISA 3A state championship cross country team. He was also co-captain with third-place finishes in the 800 and 1600 events and second place in the 4x400 relay on the state championship track and field team this past spring.

Matthew earned a varsity letter last year. Last month a large contingent of the Golden family met in Greenville at an AAU meet to watch Robert and Matthew compete. The members ended up with a good weekend after Robert won the state 3000-meter race and came from behind to win the 1500.

Northan said it was a great time for all but most notably his now 82-year-old father. "(He) struggles with Parkinson's Disease and doesn't leave home much," Northan said. "When he found out we would be running in the state qualifier in Greenville, he told my sister he wanted to see his grandsons run. We were surprised but happy for an opportunity to get him out of the house."