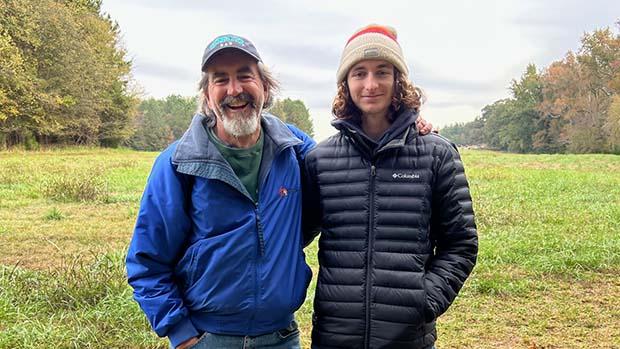 Nash Mills had been there before. Headed down the stretch at a cross country meet, accompanied by cheers.

Last at the Region VII-AAAA meet, though, is a long way from where Mills was in July. Every step is a step forward. And he was thrilled to be there.

Watch more from the interview with Mills

Mills, a championship-caliber runner for Beaufort High, had his world and running career turned upside-down in July. Headed to the beach to surf with his dad, Beaufort coach Howard Mills, was involved in a serious accident.

"There was a car in front of a dump truck, and the dump truck couldn't stop in time," he said. "He pulled out into our lane, and he hit us head-on."

Nash's dad was in the passenger seat and suffered a concussion and knee injuries. Nash had to be cut from the vehicle. He was airlifted to Savannah, where a rod was placed in his broken right femur from his knee to his hip. "I was out for three or four hours," Howard said. "Physically, I remember getting ready to go to the beach that day, and that's it. But I remember waking up in the hospital. They told me Nash had been airlifted and was preparing for surgery, and my heart sank. I knew what I felt like. I couldn't imagine what he was going through."

Nash was alert through the entire process.

"I remember everything," he said. "I remember getting cut out of the car. Our old soccer coach drove by and didn't know who was in the car, but he stopped. He was talking to me and keeping me positive. I remember all of it."

Nash quickly set about his recovery, which has been going well. Howard said his son's recovery has been something he's letting Nash set the pace for.

"We have a great relationship, but being the coach as well as the father sometimes I do push him at times," Howard said. "You just can't on this. You have to let the healing happen. I'm not in his body, and I know he has to take the reins and just do a little more a little bit at a time."

Nash's recovery has been more rapid than expected.

"It seems like it's been long and slow," he said. "Apparently it's been pretty fast. According to the doctors, it's been one of the fastest they've seen. It's just a matter of getting my strength back and trusting my leg."

That trust has been coming along. Nash has been walking and running for several weeks, including competing in the County Championships and the Region Championships. The first time out, he ran 37 minutes. The second time, it was 27.

"Improving by 10 minutes is pretty good, I guess," he said. "Everybody cheering for me and bringing me in at Region at the finish line was great. I got last place, but I finished."

That finish meant as much as anything to Nash.

"It felt great," he said. "It's hard to describe, really. You never feel anything like that until you go through what I have. My best friend, Charlie Bennett, was there, and I'm there just crying in his arms. Everybody's cheering. It just shows you how much the sport means to everyone."

From Howard's perspective, the finish was something special.

"First, it was just the idea of him getting through it and finishing three miles," he said. "And it was just really touching when he came through. It wasn't just our team, it was guys from Hilton Head, May River, Bluffton...some of the guys who have been top runners for years and who he's competed against, they went out on the course and ran in with him. It was just really cool. It's not something you see often. And then Charlie at the finish. They've been running together since 7th grade. They have a relationship like no other. They do everything together, they're tight, and to have them both committed this season, to have them have that moment together, it's just really satisfying." Nash is planning a return for track season. He's a state contender in the 800 meters, and wants to contend for the 1600 meter title, too.

In the meantime, he's helping Beaufort stay sharp for the state meet. It's something he's been doing since his injury.

"He's been great," Howard said. "Even at the very first, when he could barely walk on crutches, he was out there at workouts at seven in the morning. He's been at every meet. He didn't miss anything. He's run the website and offered advice. I'm really proud of him for all of that."

"I just try to stay positive," Nash said. "That's the only way I really know how to deal with it. It's just being around my friends and family a lot, and trying to help the team because I can't help them on the course."