Jaylen Boudreaux is about to trade in being a top hurdler in the country to serving for his country.

The Cane Bay senior and Michigan native is about to compete in his final South Carolina High School League 5A state meet before joining the Navy.

Boudreaux will leave for basic training on June 20 in Great Lakes, Illinois. Before he does, though, the speedster is hoping to lead his team to a championship.

"I don't like to speak the future into existence, but I'd like to win it all," Boudreaux said.

Cane Bay will compete with Spring Valley and Carolina Forest for the team title. Boudreaux plans to contribute strongly by competing in four events which include the 110-meter hurdles, 400-meter hurdles, 4x100 relay and 4x400 relay.

He has the nation's fastest time in 400 hurdles at 52.16 and is defending state champion in the 110 hurdles, 400 hurdles and 4x400 relay. He also captured individual lower state titles in both hurdles last week. 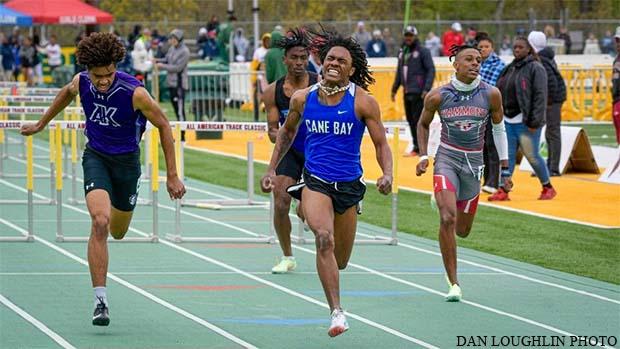 "We're going into the state championship knowing everybody is good, he said. "We know we'll be pushed and going up against the best in South Carolina. We're not putting any pressure on our kids. We are in the team title race. We're so senior heavy, and we want them to just have fun. If they do that the rest will take care of itself."

Boudreaux considered competing at the collegiate level but his heart was pulling him towards the military. He'll spend the next eight years in the Navy and said it could end up as a career.

"I'm willing to see how it is," he said. "I've really been interested in the SEAL (Sea, Air, and Land) program and special warfare. I went to a career fair and told them I was available. I didn't really want to join the Air Force because I've got a lot of family in it. It was either the Navy or Marines."

"He leads by example," Cane Bay head coach Greg Hall said. "He's not necessarily the most vocal guy. The kids see what he does to prepare himself. He puts in the work and the other kids see it and feed off of it."

Hall said that his senior leader will have a bright future in any decision made.

"He really did look hard at running collegiately," Hall said. "He still has a chance to go to school and get an education with the military. I'm proud of him for that because that's not an easy decision."

Hall added that Boudreaux's leadership skills have been exemplified all year.

"He leads by example," Hall said. "He's not necessarily the most vocal guy. The kids see what he does to prepare himself. He puts in the work and the other kids see it and feed off of it."

Boudreaux knows this is his last track meet and last chance to not only defend titles but win a team championship. He said he's going to give his all before he does the same for his country.

"I'm going in with the mindset of leave it all on the track," Boudreaux said. "I've been told by my hurdles coach to go out with a bang. I will not be torn up if I don't do as well as I want to do. At the end of the day, I want to have fun."