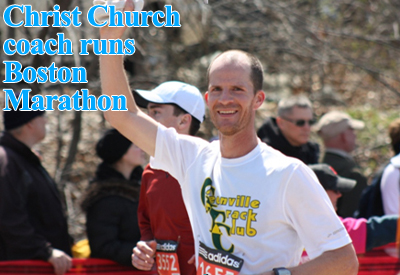 My path to the Boston Marathon really began in the fifth grade.  I didn't know much about marathons at the time; I just liked to run.  My PE teacher, Mrs. Boehmke, organized several one mile fun runs to celebrate various holidays during the school year.  These were my first races.  I still remember my times 19 years later:  6:03, 5:56, and 5:49.

I've been racing ever since.

My dad had the greatest influence on my running goals.  He ran about every day while I was growing up.  Sometimes I would join him on a run around Furman, or as I got older, up Paris Mountain.  We discussed his running routes, pacing, strategies, and old personal best times at various distances along the way.  I paid close attention to his personal best times and wanted to beat them all.  I especially wanted to beat his best Paris Mountain Road Race 20K time, which was 1:25.

After my freshman year of running cross country at Travelers Rest in 1996, I signed up for my first Paris Mountain Road Race.  It was an intimidating challenge, considering I'd never run more than six miles at the time.  This race was twice that distance with a 1,000 foot climb at the beginning.  I was dead at mile three.  It took all I had not to walk, and I finished the race in around 1:45.  It took me eight more tries in 12 years to finally beat my dad's time with a 1:23 in 2008.  By that time I had beaten his times at every other distance—except the marathon.  A picture of his 2:59 personal record had been sitting on the living room bookshelf my entire life.

My first assault on the marathon family record, as we called it, was the 2008 Spinx Run Fest Marathon in Greenville.  I spent 16 weeks training following the Furman Run Less, Run Faster plan (FIRST).  The plan got me into great shape, but I lacked marathon experience.  I ran well through 18 miles, but the last eight miles hit me like a ton of bricks.

I fell well short of my goal time and finished in 3:08.  On the other hand, lots of people congratulated me on running a Boston qualifying time (BQ).  Boston wasn't really on my mind; all I wanted to do was beat my dad.  I guess the talk of BQs planted the seed in my mind to eventually run the Boston Marathon.

My next marathon was six months later in Myrtle Beach.  Once again, I ran a 3:08.  I didn't follow any training plan for this one.  I just did it hoping a 2:58 would
miraculously appear on the finishing clock as I crossed the finish line.  I learned it doesn't work that way.  I was exhausted and started thinking it was going to take me another 12 years to beat the marathon family record. 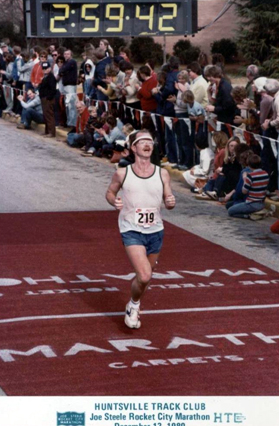 It was time to get serious again.  I signed up for the 2009 Charlotte Thunder Road Marathon with every intention of smashing my dad's time.  I used the Furman training plan again, and started doing long runs with a partner.  My training partner helped me pick up the pace on long runs.  Instead of a 7:25 mile pace on long runs, we were often running closer to 7:00.  I needed to run about 6:50/mile to beat my dad.  On race day I ran a 6:48 pace, clocking a 2:58 to set a new family record.  My dad and entire family were at the finish line.  I still get teary-eyed thinking about it.  That time would become more significant as it turned out to be my official BQ for the 2011 Boston Marathon.

When I realized the Boston Marathon this year coincided with my wife's spring break at work, I jumped at the rare opportunity.  I thought, "Why not?  I have a BQ, and she can go with me.  It's a mini-vacation!"  Going to Boston was really more about taking advantage of that opportunity than a lifelong dream to run the race.  Most of my family was able to make the trip as well.  That's what made running Boston special for me. 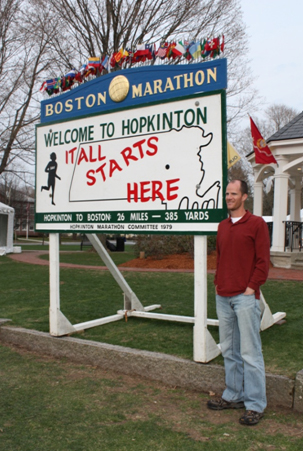 We arrived in Boston around 1 p.m. on Sunday and headed to the Hynes Convention Center to pick up my race packet.  It was there that I started getting a feel for the grand scale of this event.  There were runners everywhere!  The place was packed.  I felt a little overwhelmed by the number to people and not knowing what to expect on race day.  I started feeling better when I sat down for lunch with my family.  They were almost more pumped about the race than I was; however, they made it perfectly clear that they were glad I was the one running 26.2 miles the next day.

Nevertheless, their enthusiasm was contagious, and I started getting excited.

My alarm sounded at 5 a.m., and I was instantly awake and ready to go.  It's too bad the race didn't start for another five hours!  I knew the weather forecast called for 50 degrees and windy at race start time so I tried to dress accordingly.  I put on running shorts, a skin-tight moisture wicking undershirt and a Greenville Track Club technical shirt before finally putting on warm-ups.  After a quick breakfast I said goodbye to everyone and headed for Boston Commons to catch the bus.

Boston Commons was like a huge runner magnet.  Runners were coming from every direction and converging toward the buses.  Luckily, it all seemed pretty orderly and the wait to get on a bus at 6 a.m. took just 10-minutes.  The ride to Hopkinton was about 45-minutes long, which gave me a lot of time to reflect on my recent training.

My training for the race was only three weeks long due to an injury.  In December I started noticing a dull ache on the top of my right foot.  It got worse as I continued to run.  I self-diagnosed it as a stress-fracture but never went to see a doctor.  I figured all the doctor would tell me is that I needed to take some time off.  I took a week off.  A week wasn't enough time.  I took another two weeks off, still not enough time.

I ended up taking a full month off with no running.  Finally it seemed to be getting better.  I trained for three weeks in March and ran a few races but did only three long runs of 13, 16, and 18 miles.  Those runs led me to believe I was in better shape than I really was.  That would turn out to be a big mistake.

The bus arrived at Hopkins School, and the driver wished us luck as we got out and headed into the athletes' village.  The athletes' village was where we waited until it was time to head to the starting line.  It was basically a field with some big tents, surrounded by port-a-johns.  I'm glad I had the official race program along to read because all there was to do was sit and wait.  I sat there in the cold and wind for two hours before being released to go to the start.  I learned that part of running the Boston Marathon is surviving until the race begins.

On my way out of the athletes' village at 9:15, I ran into Tim Stewart, a Greenville native, who was also running the race.  It was nice to see a familiar face in a sea of strangers.  I didn't stay and talk long.  I was nervous about where to drop off my race bag and how to get to the starting line.  Tim has run Boston before and seemed to be more relaxed about everything.  We ended up right next to each other in the starting corral so all my rushing around didn't do any good.

At 9:50 the elite athletes came out of their private warm-up area right next to the starting line.  I couldn't see them very well from where I was standing but did see Ryan Hall jumping up and down to pump up the crowd as he came out.  At 9:55 they played the National Anthem and then fired the gun.  Boston here we come!

The first 5K went by really fast.  There were fans screaming and runners jockeying for position.  The excitement kept me from paying much attention to my pace.  I did glance at my Garmin when it chimed mile one at 6:48.  That's the exact same 1 mile split as I ran in the Thunder Road Marathon.

I have a rule for using the Garmin during long distance races.  I allow myself to look at the one mile split and that's it.  I run on feel alone after that.  This rule keeps me from trying to run beyond my ability, making the race more enjoyable.  I like to look at all the data and analyze my race afterwards.

At the 10K mark I was still running the same pace as I did in Charlotte (41:37), but I was not in the same shape.  I think in any other race I would have picked up on the usual cues about how I felt and slowed my pace.  Not here; the crowds were so loud that I couldn't hear myself breathing too hard.  I also couldn't gauge my pace off the other runners.  Tons of runners passed me.  I passed other runners.  And anyone running my pace blended into the crowd.

I ran into the town of Wellesley and through the "scream tunnel" of women from Wellesley College.  They definitely lived up to their reputation.  It was so loud!  A little farther down the road I crossed the halfway mark.  I felt tired and realized that I ran too fast at the beginning.  In Charlotte I went through the halfway point in 1:28.

When I saw the clock today at 1:30, I knew I needed to let go of any thoughts of breaking three hours.  The main thing that would keep me going the rest of way was looking forward to running past my family.  I saw my mom and older brother as I was leaving Wellesley.  Seeing them cheering me on instantly lifted my spirits.

I needed another boost around the 25K mark as I was approaching the hills of Newton.  Luckily I got it.  My wife, sister, and her boyfriend spotted me and started cheering.  My sister, Karen, was yelling "Go Eric! You're awesome!"  They were troopers for riding the jam-packed "T" for 45-minutes to see me in Newton.

The hills of Newton were challenging.  At mile 19, I felt an overwhelming urge to walk.  I knew the last of the hills, famously known as Heartbreak Hill, was coming up between mile 20 and 21.  I thought to myself, "I have to keep going.  I don't want to tell people that I walked up Heartbreak Hill."  The hill didn't turn out to be as bad as I thought it would be.  I guess I'm used to running up bigger hills in Travelers Rest.

I would have walked right after Heartbreak Hill, but the crowd kept me going.  Could I really walk in front of all these people?  The urge to walk finally won at mile 22.5.

During my walk the crowd was very supportive.  They looked at my Greenville Track Club shirt and yelled, "Go Greenville! You're almost there!"

Another runner walked up beside me after three hours had elapsed and said, "It's not our day, is it?  I'm supposed to be done by now."  I said, "Yeah, me too!"  I felt better knowing I wasn't the only runner way off his usual pace.

I started running again with about two miles to go.  I passed my cheering family at Kenmore Square for the last time before the finish.  With about a mile to go I saw the Citgo sign, which signaled the end was near.  I rounded the final left-hand turn onto Boylston Street and soaked in the scene as I slowly jogged toward the finish line.

It was my worst marathon performance by far, but the experience was completely worth it.