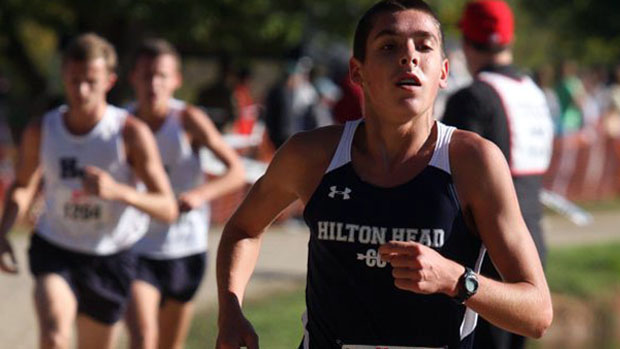 HILTON HEAD ISLAND – Jack Manesiotis says he’s had a "pretty good" cross country season, so far. He’s trimmed a few seconds off his personal record in the 5K, but the Hilton Head High junior knows he can do better.

Jack moved closer to that number at the Wendy’s Invitational in Charlotte, running the 5,000 meters in 15:38. It was a performance that earned him scrunners.com Runner of the Week honors. The award is presented each week during the high school cross country season by Go-Green Timing and On On Tri. Laura Miller of J.L. Mann was named girls’ Runner of the Week.

Jack has been competing in cross country since middle school.

"My sister started when she was in eighth grade and I came along," he said.

Jack has been running since he was 10 years old, when he would join his father on a course around a soccer complex.

"We would run a lap around the complex; the second week we ran two laps and so on. Then, I would go to my older brother’s soccer practice and run for the entire time, I just liked it."

Jack said he enjoys cross country for the competition it offers, as well as the social side of the sport.

"I have become friends with guys around the state that I compete against," he said. "I look forward to seeing them."

His coach for past five years, Bill Wrightson, said Jack has advanced in cross country to where the coach now considers him a good student of the sport.

"He understands the science of cross country running," Wrightson said.

Jack said he hopes to continue that friendship into college, though he’s still undecided about which school he’ll attend. Last summer, he and past Runner of the Week Tony Morales of Lexington High attended a camp at Florida State.

"They have a great program there and I really enjoyed running with them at camp," he said. He’s also interested in Clemson, where his sister now runs, and he plans to visit the University of Georgia next spring.

When he’s not running, Jack competes on a junior cycling team out of Hilton Head during the spring and summer, and he plays golf with friends, "although I need to work on my game."

As for the balance of this cross country season, Jack said he and the Seahawks are shooting for a third straight state Class AAA championship. He’s also aiming for a first-place finish at State, where he has come close the past two years.

Jack said he’s also hoping to qualify for the Foot Locker Nationals, though he knows he’ll have to do better than 15:20 to get there.