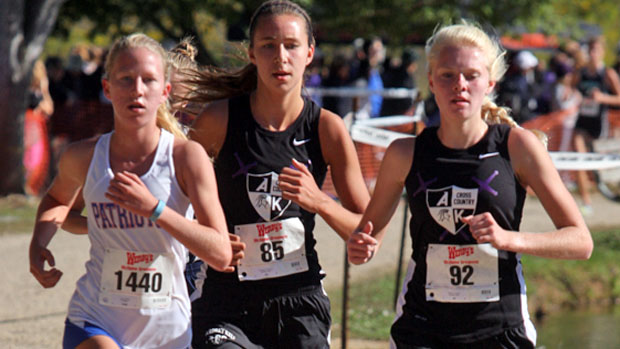 GREENVILLE – Laura Miller has come a long way in her short career as a high school cross-country runner.

In that relatively short time, Laura has trimmed a whopping five minutes off that first run, and turned in her best performance to date recently at the Wendy's Invitational with a time of 17:56.  Her previous personal best was 18:31 at State last year.

That performance has earned her Runner of the Week honors from scrunners.com. The award is presented each week by Go-Green Timing and On On Tri to outstanding high school boy and girl cross country performances.

Laura said one of her goals this season was to run the 5,000-meter in under 18 minutes. She did that at the Wendy's meet held in Charlotte, and by a comfortable margin.

"The season has been good," Laura said after learning she had been named Runner of the Week by scrunners.com.

She has progressed perfectly since I started coaching Laura her freshman year," Borowicz said.

The coach said Laura's success at cross country has spilled over into track where she will begin her third year next spring.

Laura said her coach and friends keep motivate her to run.

"I enjoy running, especially with hard-working friends," she said. "The enthusiasm of my coach and runner friends motivates me to work hard and do my best."

In addition to track, Laura said she also participates in church league basketball. Her sister, Beth, is also on the Patriot girl's cross country team.

Though Laura has broken the 18-minute mark in the 5K, Borowicz says she has the potential to run faster.

"Her potential for improvement has not even been fully challenged at this point in her running career," Borowicz said. "She has a lot more to show me and herself."