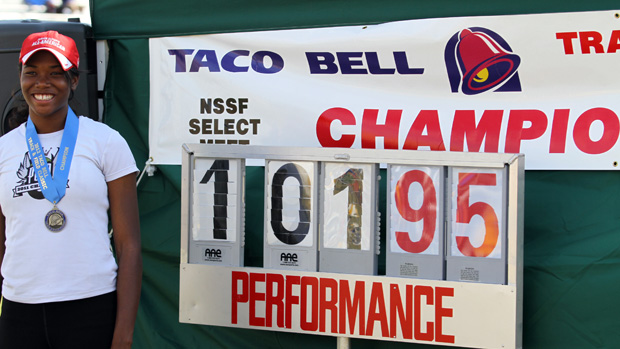 COLUMBIA -- Kiah Seymour, a senior from Archbishop Carroll High School in Washington, D.C., set a new U.S. no. 1 mark in the high school girl’s 400-meter hurdles Saturday, crossing the finish line in 1:01.95 and beating the previous mark of Jennifer Cannon of Tennessee High School of 1:02.60, which she ran last weekend at the Beach Run Invitational in Myrtle Beach.

Seymour set the new season national mark at the 20th Annual Taco Bell Track and Field Classic in Columbia.  It was the biggest development in a day of new meet records and a rewriting of top 10 meet finishes in a number of events.

Seymour said she felt good heading into the 400, but she “felt kind of tight” early in the race and didn’t feel that she was on a record pace.

“I didn’t feel that I was going to do that well. I ran the 200 last night and I was a little tired, but I’m happy with my performance in the hurdles,” she said.

The senior, who started running the 400 hurdles during her sophomore year, has been accepted this fall to Penn State University, where she said she plans to continue her hurdles running.

The day was sunny, but the wind was more of a factor for runners compared with the mostly calm afternoon and evening on Friday. The Spring Valley High School Color Guard presented the colors at the opening ceremony before a crowd of around 2,000 parents, family and friends at Harry Parone Stadium.

One of the highlights Saturday on the boys side came early in the day when the Summerville High boy’s ran a top 10 national 4x100-meter relay time, finishing in 41.38. That time was a half-second faster than runner-up Berry Academy.

The quartet said the victory in this 4x100 was especially sweet.

“We felt a little disrespected coming into the race,” said Davon Anderson, a junior who ran the second leg on Saturday. “We were starting to build faster times.”  They said they don’t expect to be overlooked now, heading into the state meet next month.

Also from the boys, another South Carolina student/athlete, Griffie Loy of Bishop England High, took first place in the shot put with a heave of 55 feet, 6 inches. That performance wasn’t a personal record for Loy.  That came a few weeks earlier at the Coaches Classic where he completed a toss measuring 56 feet, 1 1/2 inches. 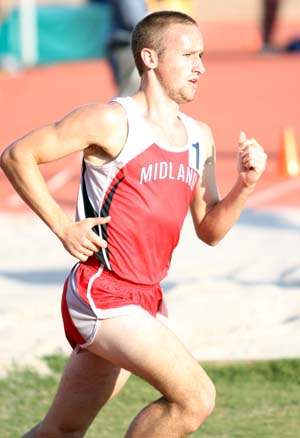 Loy said he felt nervous going into the Taco Bell event, but the feeling worked to his advantage in the competition.

“It  helps get your heart rate up and get the adrenalin going,” he said.

During warmups, Loy had a toss of 58 feet, but decided to dial back a bit once the competition started.

“I guess I felt like I had something to prove in warmups,” he said.

Loy has come far in only his second year in shot put. His longest toss last year was 39 feet.

“I have better coaching and I spend a lot of time late at night watching film to improve my technique,” he said.

Even though he has one more year at Bishop England, Loy said he’s already looking ahead to college. He said he’s been in contact with Notre Dame and some Ivy League schools, thou he’s leaning toward joining the Marines and enrolling at the Naval Academy.

In one of the more impressive performances Saturday, Jacob Burcham of Cabell Midland, West Virginia, ran away from the field in the boys 3200.

Burcham led from the start and at one time had a 100-meter advantage.  He narrowly missed setting a new meet record, finishing with a time of 9:00.21 or nearly 19 seconds in front of Hilton Head’s Jack Manesiotis who finished second.