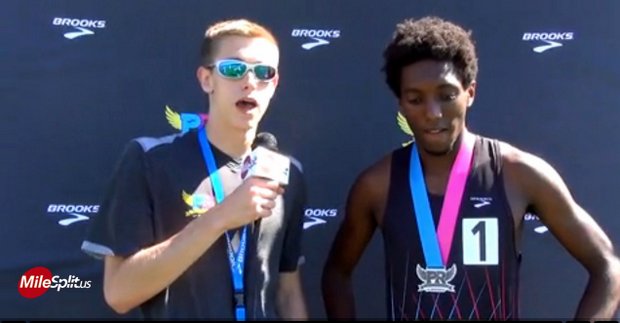 Being given the opportunity to attend the 2014 Brooks PR Invitational as a student reporter was hands down the greatest experience of my life. As an athlete myself whom had been removed from running due to injury over the last year, I yearned for nothing more than to still find a way to be involved with the sport. The moment I saw the Brooks PR student reporter contest, I knew that this was my shot to go on out and partake in an event that I would never again have the chance to do. What I didn’t know during the initial moments of elation after I received the confirmation e-mail from Amy Stepman that I was one of the two winners, was that this trip would far exceed any expectations that I had.

The trip began with an early morning, 3:45 a.m. to be exact, as I rushed to get everything together and make it to my first flight of the day. This being my first time ever flying alone I was amazed with how smoothly things went, except for the point where the pilot informed us that the landing strip was not visible on the first go round, but we were going to give it another try. Aside from that one small mishap and four more hours of flight time I had finally arrived in Seattle, Washington safely and fully intact. Being from such a small town I was enthralled by the size of everything and was for a time slightly confused, but once I was able to find the Brooks representatives everything was smooth sailing.

Some of the first athletes I met included the likes of Wesley Petcol, Jasmine Quinn, John Dressel, and Kailee Sawyer just to name a few. After everyone from the incoming flights managed to come together we all loaded a bus that clearly stood out from all the others with its striking blue and pink zigzagging stripes reading “Brooks PR Fastest of the Fast." On the short ride over to the hotel everyone made small talk about their trips, races, and training. As for me I was promptly enlightened by my seating partner to the fact that Canada is practically the same as the states, barring the use of the metric system and their northern lingo. Once we arrived at our hotel, The Grand Hyatt in downtown Seattle, we were treated to a wide array of foods for lunch and the banners in the lobby created a very welcoming atmosphere. Some of the main attractions within the hotel included a gear room, where Brooks supplied us with amazing gear and shoes, a hot tub, and a game room filled with gaming systems, skeeball, ping-pong, mini basketball, computers, and a photo booth. As all the athletes arrived, this quickly became the social hot spot. Once the majority of the athletes had gotten back to the hotel after heading out for their runs we were all taken on a walk down to a local restaurant on the water, where we enjoyed pasta, salmon, and salad. Full of food, excitement, and curiosity, most of us decided to ride on the waterside ferris wheel where the view of the surrounding city was able to be fully absorbed.

Once dinner concluded we all returned to the hotel where we saw none other than Nick Symmonds in the lobby. After a few minutes of small talk and a quick photo it was back to the game room to practice interviews. I’m not quite sure whether or not it was the nerves, or the fact that I had been awake for the last twenty hours, but the first few were quite sub-par. I returned to my room that night disappointed in myself, but quickly after meeting my roommate, Grant Swinton, those feelings faded away as much needed sleep replaced them.

The majority of my morning on Friday was spent passing time until the others woke, seeing that the three hour time change had me awake at 6 a.m. with nothing much to do. Once enough people had awaken to form a small group we all walked across the street to a restaurant in a mall where we were treated to breakfast. Around eleven that afternoon buses took athletes out to Green Lake so that they could do their shake out runs. I tagged along for the sheer sake of going, but within thirty minutes of arriving I found myself gliding along beside Nick Symmonds cracking jokes and talking injury recovery. After a few minutes with him we intersected with Mark Wieczorek and I turned to run with my second pro of the day. While for some this would be the most exciting part of the trip it wasn’t until my meeting with coach Mackey that my trip was made. During our twenty or so minute conversation I was humbled by my incorrect assumption that he was coaching his daughter, but was much more impressed by his willingness to overlook my naivety and still speak of his athletes, methodology, and the influences that led him to this career. After Coach Mackey and I finished conversing I made it my goal to go and meet each and every Brooks Beast that was at the run that day. Admittedly I did miss a few, but luckily there were many more opportunities that had yet to present themselves.

Following our runs at Green Lake we were treated to a lunch cruise that featured many of the scenic views around Seattle including famous movie sites and the home of Bill Gates. After our lunch cruise we returned to the hotel for a press conference with Katie Mackey, Gabe Grunewald, Garrett Heath, and Nick Symmonds. Each athlete contributed valuable answers to questions regarding injury, the growth of track and field, and the success of high school athletes. Later that night these same athletes, as well as their teammates, took the time to meet with all of us and sign autographs over dinner. Once the meet and greet was over everyone headed to their rooms to prepare for the meet the next day.

Saturday morning was approach differently by everyone, some seemed stoically concentrated while other kept the ever present lightheartedness that they arrived with. Breakfast was served all the same and time was passed waiting for the bus to leave for the meet. Around eleven that afternoon we all boarded buses and were taken to the meet via police escort. I was lucky enough to be sitting beside one of the Hanson brothers where we talked marathon training and the use altitude work in modern day training. When we arrived the atmosphere at the track was quite party like featuring bow ties, henna tattoos and bright gold sunglasses. Early arrivals were treated to the sight of the Brooks Beast athletes running one of their final workouts before the USA Championships and free t-shirts. Once the meet began it was non-stop interviews, commentary, and cheering for all of the participating athletes. It was amazing seeing the future of North American track and field performing their craft in person. After four hours of rollercoaster like emotions all around everyone boarded the buses to prepare for the night festivities.

The final night featured a banquet were three of the most important awards were presented. The girls athlete of the meet went to Bethan Knights for her gutsy two mile run, where she took it out in sixty-six seconds and ran a U.S. high school record. The boys winner was Christian Coleman, the 100 meter runner who arrived at two in the morning yet still went on to run a personal best of 10.29. The final award of the night, the Brooks Run Happy Award, was presented to someone who epitomized the award through and through, Mike Brannigan. This young man has a story that I am in no position to try and tell, but what I can say is that the sparse amount of time that I was able to spend around him was truly the most inspiring time of the entire trip. After the presentation of the awards a dance party was held downstairs. This was the one place that everyone was on the same level, as we all proved why we chose to run in this life and not to dance. With the organized party over we all headed home and split off to enjoy our final night in Seattle.

Making sure not to spoil all of the details of the final night and sparing you the boring details of the flights home, I want to say to anyone who has even the slightest inkling that they may want to come and be a student reporter. Do it. Take a chance, make some memories, and hopefully you will enjoy this experience the same way I did. I want to say one more time a great big thank you to, Brooks, Flotrack, and Milesplit for giving me this amazing opportunity and helping make a dream into a reality. I will never forget “My Brooks PR Experience.”