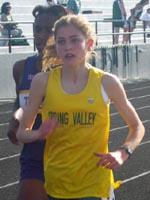 What was the biggest adjustment you had to make to compete at the college level?
I think that the jump in intensity, both in terms of racing and training, was the biggest adjustment. My mileage increased quite a bit, the number of workouts per week increased, and also getting used to training with such a talented group everyday was new. The overall number of races was fewer, but each race mattered more and had a much higher level of competition than I was used to. I think that part of adjusting to these differences was realizing that I had to still listen to my body in training, as well as remembering that the aim is still to perform at your best at the end of the season.

How would you rate your college running career and overall college experience?
My overall experience of competing for Stanford was something I will treasure forever. I certainly did not reach all of my goals in running, and that led to many frustrations along the way, but at the end of the day, I can say that I have no regrets. I grew as an athlete through the years, and I had the opportunity to train and compete with some of the most amazing women I've ever met. Now, being more removed, I'm also able to see how many of the skills and lessons I've learned in running translate into life afterwards.

Is there anything you can tell high school athletes to better prepare them for the college experience?
To be patient and to stick with it. From afar, it's easy to think that some people just do well and that you will never get there. However, I've had the wonderful opportunity to have trained with some of the best athletes in the country, and I can say with confidence that everyone has rough patches. Sometimes it seems like you will never have a good race, but if you just keep at it, you will improve.

I would also emphasize that it is ok to take days off or to take a few days to cross-train. It's easy to get caught up into an immutable training plan, but if something is hurting or if you are feeling extremely worn down, it's so much better to take care of it quickly.

Have you been back to see a meet recently?
I haven't been in South Carolina during the high school season for several years, so unfortunately I haven't seen any meets.

What memories from competing in high school stand out the most?
Winning the 4x8 at the state meet with my relay team during my sophomore year (2004) is still one of my happiest memories. We all had to run our best to do that, and I remember being completely elated after we just barely beat Northwestern. Setting a new state record was a nice bonus, too (though I know it has since been broken).
Another highlight was competing in my senior year (2005) cross-country state meet. It was a rough race for me, but both of my younger sisters were also on the varsity team that year, which was a really cool thing for my family.

Of course, I also have many happy memories of hanging out with my teammates: on the bus, passing time during meets, eating lasagna at Coach Shaw's house, cheering...

What do you miss most about running in high school?
Building off of the previous question, I miss the relays from high school. I loved the 4x8, but I certainly was not a candidate for the DMR (distance medley relay) in college - much too short of a distance for me

What piece of coaching or advice that someone gave you has been the biggest help?
The unfortunate thing about advice is that it's often hard to understand it until you've already made the mistake yourself. That being said, different pieces of advice have been very helpful to me at different times during my running career. My high school coach, Kevin Shaw, was very emphatic that we would increase my training gradually each year. I think that this approach undoubtedly allowed me to improve each year and run my best as a senior. When Jason Dunn came to Stanford, he tried to get me to relax during races and to just race. I started racing much better after I had finally internalized this. I joined the New Balance Silicon Valley team for a year after college, and there Dena Evans had me focus a lot on my form, which certainly needed improvement. Throughout all of this, I was always surrounded by the wise and encouraging words of my teammates at Stanford.

What are you doing in the present and hope to do in the future?
I'm currently in my first year of a PhD in Biomedical Engineering at Oxford University in the UK. I'm interested in medical technology, so I'd like to be involved in some aspect of an exciting medical device/similar company when I'm done. I'll be over here for the next several years, though, so I'm looking forward to diving into my research in the short-term.

How was the adjustment from post-college?
Suddenly not having a huge portion of my day devoted to running was a strange thing. For nine years I was used to having a daily block of time with some of my best friends, spent training, laughing, and focused on a shared goal, and I really missed not having this. At the same time, I've found the absence of competing to be a huge reduction in stress in many ways. I no longer have to be as concerned about how much sleep I'm getting, how I'm feeling, whether I'll qualify for the next race, etc. Of course, the competition is also fun and motivating, but at the moment I'm really enjoying being a recreational runner and exploring the trails around Oxford.