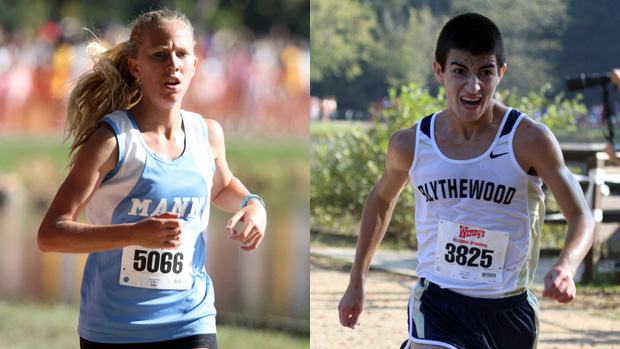 Mann senior Laura Miller improved her time at McAlpine Park in Charlotte from last season to win the Wendy's Invitational race with a top time of the meet for 2012 of 17 minutes, 47 seconds. The time, a personal best, is currently 47th in the nation.

Blythewood's Mike Lantz finished fifth overall in the open 5,000 with a time of 15 minutes, 42 seconds - a new personal best. Lantz's time was the fastest for South Carolina at the meet.

Gabriel Haughey of Daniel was sixth overall in the invitational race with a time of 15 minutes, 46 seconds - a cross country personal best.

David Moore didn’t PR at the SCTCCCA Coaches Classic, but the Christ Church Episcopal School senior would tell you that he ran the hardest and most satisfying race of his young life on that Saturday.

Journal: Hayley Lyons 'remember to pace and be positive'

This week is a step-back week in my training, and it’s coming at the perfect time.  Not only have I been icing my knee all weekend, I think my mind needs a little rest from the long run before I up the mileage next week.

Mann senior Laura Miller improved her time at McAlpine Park in Charlotte from last season to win the Wendy's Invitational race with a top time of the meet for 2012 of 17 minutes, 47 seconds. The time, a personal best, is currently 47th in the nation.

Several South Carolina teams are competing in the Wendy's Invitational Saturday in Charlotte at McAlpine Park. ncrunners.com previews the races.

Journal: Hayley Lyons 'Just running because I love to run'

Intro:  Last night, after I submitted my journal for Week 5, I was on my laptop, when I kept coming across a race called the Ramblin’ Rose half-marathon in Charlotte, N.C., which isn’t too far from me.  I thought about it for all of five seconds before registering.  I’m already registered for two more half-marathons before the full, but the first isn’t until October—forever away!  Despite the fact that I had to pay late registration (yikes), it seemed like the perfect way to get my mileage in and experience race day at the same time.

Photographs by Ben Wade for scrunners.com

Aaron Templeton had the day's fastest time in the Open Varsity race, a great start to a great day at McAlpine Park.

Results from all the races, compiled into one giant virtual meet for each gender then summarized for your convenience.

XC Wknd 10/6: Montoya movin in CA, Sean McGorty rips one in VA, much more inside!

US#7 Cardinal O'Hara runs near the front of the pack and sweeps top-4 places at county meet! Check out all the action here!

Graduation turnover has created a new set of favorites, but what kind of havoc will the SAT wreak on our predictions?

Runners of the week, presented by go-green events

Runners chosen by anonymous panel in each part of state after reviewing results from last week. Runners of the week presented by go-green events.