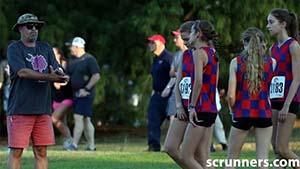 The five-time defending state champion Warriors claimed another notch in their belt with a 52-86 victory against Hillgrove in the International Girls division at the Eye Opener held on Saturday at the Roger Milliken Research Center in Spartanburg (See venue rankings). The win is the Warriors' fourth consecutive in the meet.

The Championship Girls race was taken by Nation Ford's Katie Pou (S.C. no. 1), who finished at 18:57.70. Greer Middle College's Morgan Summey was runner-up with a time of 19:30.16. Mauldin won the team title with a 158-177 decision against Wren. Waccamaw, Nation Ford and Charlotte Catholic finished third through fifth, respectively.

Next up: Runners have the chance to preview the SCHSL state meet course Saturday with the Bob Jenkins SCTCCCA Coaches Classic.