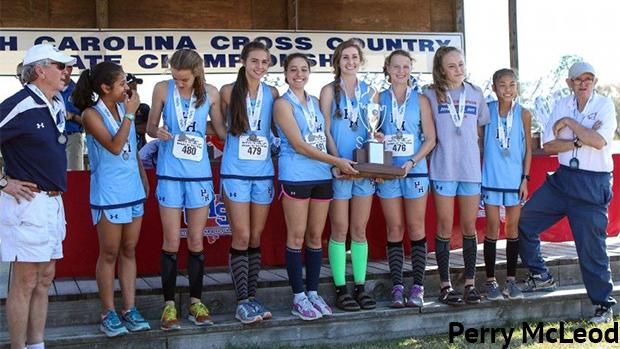 HILTON HEAD ISLAND  -- Joe Monmonier is about to take on one of the toughest challenges in his six years as athletics director at Hilton Head Island High School.

Longtime cross-country coach Bill Wrightson has retired. He passed the news on to his boys and girls' teams shortly after the state championship meet in Columbia six weeks ago.

The boys' team won state for the fifth straight year this season. The girls placed second to Daniel High.

Wrightson's record at Hilton Head: eight state cross-country titles for the boys, five for the girls. As assistant events coach in track, the 4x800 meter relay team has won 10 of the last 11 state titles.

All were accomplished in a span of just 13 years; legendary stuff by any measure.

"It's going to be difficult," Monmonier recently told scrunners.com

Monmonier said, for now, he will lean on the assistant coaches, Max Mayo, Inrique Baez and Judy Melinson as the outdoor track season approaches. The hunt for a new head cross-country coach will focus on bringing in someone who is both a coach and a classroom teacher, he said.

"That was the one thing the cross-country staff, including Bill, felt that we never really had," Monmonier said, someone who could interact with student/athletes in a school setting.

Hilton Head has enjoyed a somewhat unique situation since Wrightson took the head-coaching position in 2005. Though he wasn't in school on day-to-day level, he was retired from the private sector, which gave him the time to take the Seahawk's program to the Hilton Head community.

"Bill worked well in our community and, as a result, the program had great community support," Monmonier said.

Monmonier said that with Mayo, Baez and Melinson in place, the program is already at a level that he's comfortable with, should the search for a head coach not immediately lead to that sought after teacher/dedicated coach.

"We have what we need here, but we need to find someone who is a teacher and coach, and, if we can't I have the pieces of the puzzle to remain successful," he said. "It's not like you'd have to start over from scratch, here."

Monmonier said the school would begin advertising for a new teacher/cross-country coach when teacher positions for next school year are announced, typically sometime in February.

"It's simply a matter of trying to find someone who will fit in the mold, who is willing to do the hard work," he said. "If we don't find an awesome candidate, then we already have awesome coaches here. I'm willing to wait for the right fit."

As for Wrightson, he and his wife Joy are settling into retired living in Durham, not far from their now-adult children.

Wrightson said he might get back into cross-country, offering his experience to a local program, but that's still a year or so away.

"That's maybe down the road, but right now, we're still living out of boxes."

He said he might make a trip or two to meets in South Carolina during the upcoming track season to watch his former team compete and re-connect with students he coached.

"You meet such wonderful people; quality kids who understand the meaning of sacrifice and hard work," the former programmer and IT specialist said, adding that at that period in his life he never imagined someday leading a high school cross-country team to multiple championships.

"Absolutely not," Wrightson said with a chuckle, though he admits coaching crossed his mind during his high school years, but not with a cross-country team.

"I thought about it, but it was always in the major sports, like a numbers coach/coordinator in football."

Wrightson's outlook would change later on, when his daughter, Christie, joined the Seahawks' cross-country team in the mid-90s. He volunteered as a parent/assistant coach, which grew into an assistant coach.

"Seeing as how they weren't able to find anybody, I said I would do it," Wrightson said. Thirteen years hence, higher honors await him.

"He's an awesome coach," Monmonier said. "He deserves every accolade; hopefully hall of fame at our school and the state."