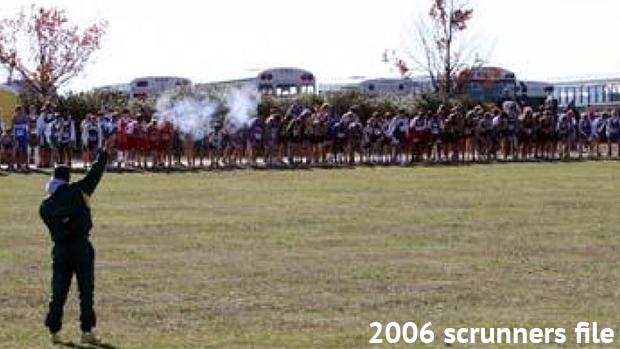 First, let me congratulate all of the teams that have made it to the State Championships.  Whether this is your first trip or (your) sixth (or for you coaches the next of many), enjoy the race, compete to your best, and remember this as one of the greatest highlights of your high school racing career.

I remember my first and only trip to theState Cross Country Championships.  A cold, rainy day in the middle of December 1973.  That morning, the three die-hards of us on the Berea team had to go and get the other two that were having a hard time believing we were going to run in this weather.  Finally convincing them we made the trip to Sumter for the afternoon race.  A lot of events happened on the way down and back that make such trips with your teammates memorable.  Because of the rain and cold, it took the South Carolina High School League what felt like many hours to complete the results.  In those days, when you finished a race you were given a tongue depressor with your place on it.

You were to give this to your coach who then placed them all in an envelope and gave them to the scorer.  You then wrote the names of the athletes besides the places on a scorers' sheet and when all the places were accounted for you would add up the team scores. Many of the tongue depressors were not initially returned, because the athletes they were given to, failed to find their coach because all they wanted were some warm dry clothes.  So the SCHSL had to search until enough were found to get a score.  We were allowed to go to the gym and wait out the time.  When the scores were finally announced, Northwestern had won and Berea was tenth.  As far as I know, the complete results of this race do not exist.

Over the years I have collected all of the State Championships.  I had my Eastside teams type the old ones (until 2000) into excel spreadsheets, and sent them to John Olson at SCRunners.  He sent them to the MileSplit Network who then converted them and got them on the SCRunners pages where they all are today.  (MileSplit did not see the team scores on the next tab of each file so they are not there (coming in near future).

1969 - First State Championship - This was an unofficial state meet held on December 13.  Nine full team and six schools with partial teams showed to compete. Sixty-nine boys completed the 2.2-mile course at Alice Drive Junior High School in Sumter.  The winner was Steve Bolin of York with a time of 11:30.  Edmunds High School (don't know where Edmunds was.  Can anyone give us some more information?) won the meet with 35 points. Twenty-nine boys finished in a JV race.

1972 - The distance of the race was increased to 2.5 miles.  Halston Taylor of Spring Valley won the race with a time of 12:15.  Taylor also won the shorter race in 1971 becoming the second double winner.

1973 - The last race at Alice Drive was pouring rain and cold (still held in December). The results took hours to tabulate and are the only complete set that we do not have.  Thanks to a few newspaper articles sent to me by some faithful coaches we do know the team scores and the top 10 finishers.

1974 - The meet moves to Sesquicentennial State Park in Columbia.  The distance was increased to around 2.95 miles, judging from the winning time of 15:34 by Lee Davis of Fort Johnson High (Again, anyone know of this school?).  Fifteen schools had a team score.

1976 - The distance for the race is increased to 3.05 miles and a girls' race was added.  The girls distance was only 2.05 miles.  Betty Cox of North Myrtle Beach became our first girls' champion with a time of 14:12 while Wando took the team title in the 4 team race. Max Minter from Lower Richland wan the boys race in 16:25.

1979 - The State Championships were moved to Hilton Field in Fort Jackson and the race distance for boys and girls was official 3.11 miles (5K).  Irmo's boys and girls won the team titles on the new course -  both teams' third in a row. (the girls would go on to win the next three).

1985 - The State Championships are scored by computers.  Richard Gohs, an Eastside student, wrote the software on an Apple 2 computer.  His program was used by every state meet until 2002, as well as many qualifiers, major invitationals (Furman, Coaches Classic, Eye Opener, etc) and two NCAA Division I National Championships held at Furman in 1997 and 2001.

2001 - The terrorist attacks on our country caused the government to restrict the use of Fort Jackson's Hilton Field.  The attacks occurred the Tuesday of the Coaches Classic Meet and John Jones of Spring Valley quickly secured Clemson University's Sandhills Research Park to hold the Classic as well as the 2001 and 2002 State Championships.

2003 - State Meet again is moved to Hilton Field but under everyone had to have picture ID's (this was before students had their own ID's and vehicles were searched).

2004 - Fort Jackson is damaged by the 2004 hurricane season and the meet is moved back to Sandhills.

2008 - The 1A schools finally have enough teams to have their own State Championship, giving all four classifications a state meet.  Christ Church won the first one.

2010 - The 1A girls succeed also in getting their own meet.  St. Joseph's won this meet and every meet after until this classification race is removed.

2012 - Chip timing is used for the first time.  Before this, all scoring was done by hand entering the order of finish using the athlete's number.  This information was collected after the finish line in the chutes where the runners had to stay in order of their finish.  The new chip system allowed athletes to leave the chute with no delays and get the results in a matter of minutes after the last runner.

2016 - The S.C. High School League implemented a five Classification system.  This causes the 1A girls to not have enough team and is again absorbed by the 2A race.  Riverside wins both of the new 5A class races.

OK - Let's see how many of these you can find answers to, just for fun, as we enjoy the week leading up to the State Championships for 2017.  See if you can get five deep in each (where significant). I'll give out the answers on Thursday.

Name the schools with the MOST State Championships (boys and girls).

Don't think the sixth man in important!  Ask Daniel High, who was involved in three ties.  But there are more.  How many TOTAL TIES for first place have there been (boys and girls).  When and between which two schools?

Name the boys and girls teams with the LOWEST winning team score.

Name the boys and girls team with the HIGHEST winning team score.

Name the boys and girls teams with the LOWEST score NOT to win.

Name the boys and girls teams with the HIGHEST score NOT to win.

Gettin' a whooping!  Name the boys and girls results that had the GREATEST margin of victory (difference in first and second place scores).

Name the schools that have the MOST CONSECUTIVE wins (boys and girls).

Name the schools that have the MOST CONSECUTIVE boys and girls BOTH win.

Name the boys and girls schools that have the MOST All-State athletes (top 15).

Name the boys and girls schools that have had the MOST CONSECUTIVE years of having at least one All-State athlete.

Dominance! Name the boys and girls schools have had the most five or more All-State athletes the same year.

The Best!  Name the boys and girls schools have had the most ALL SEVEN All-State athletes the same year.

Name the boys and girls schools have had the most INDIVIDUAL Champions.

Name the boys and girls schools have had the most CONSECUTIVE INDIVIDUAL Champions.

What is the State BEST TIME for each classification?
Name the boys and girls runner(s) that have won the MOST CONSECUTIVE individual championships.